Posted on December 19, 2015 by thebloggergirls

The Appeal of Tighty-Whities – Fetishizing Underwear

I have a readers’ group on Facebook. I’m not bragging about it, but using it in support of my views discussed in this post. As many members of the readers’ group know, I have an unabashed and passionate love affair with hot guys in white underwear. Does this count as a fetish? A tighty-whities fetish? Well if it does, then I’ll wear that badge proudly.

There are so many kinky and plainly ‘out-there’ fetishes out there, that tighty-whities shouldn’t even feature on anyone’s radar. But it seems it does. So instead of speaking for everyone else, allow me to explain why I find underwear so appealing.

Walking around in a mall, or in a parking lot, in the gym or even at church, you are likely to see a hot guy who is attractive to you. If you are anything like me, your eyes will shoot to his package and butt instantly. The eyes, hair, face, jawline, chest…all of that comes after the ass and package are inspected.

Many times (though never enough) you are blessed with finding the hot guy is wearing pants that are just-just too small, or fits snugly around a beautiful bubble butt, and your mind starts racing. There are few times in life that you actually come across a perfect bubble butt encased in stretched pants that actually outlines the briefs. When you do, please appreciate it for the rest of us.

This is the pinnacle of attraction to me. Seeing the outline of the underwear pushing through the pants material is enough to do my head in right there, and force me to sit down and hide a growing woody **goofy grin**

The point is that seeing that intimate part of a person I’m attracted to, knowing that that material is so close to the intimate parts that flash through anyone’s mind when confronted with a person they find attractive, just bowls me over. I want to hold it in my hands, I want to be as close to that underwear as it was to the perky ass that color my dreams.

My writer buddy and insanely talented and endearingly sweet friend Joseph Lance Tonlet has to pull me back from the brink many times and reel me in, as I tend to go off the rails in exploring my fetishes, likes and damn near obsessions on the page. But thankfully he let me slip this part into our new story, Quillon’s Covert, and I hope you’ll all thank him with me.

Next time you see a hot guy walking in front of you and the outline of his briefs are visible, shoot a prayer to the gods of underwear everywhere and do like this guy if you can. Only if you can! And share it with the world if you wish. We all need more hot butts and tight underwear in our lives. 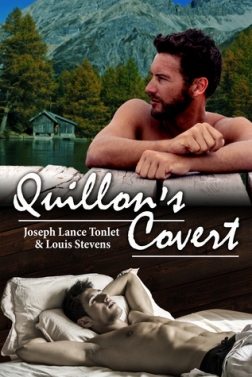 Martin is a guy’s guy, one who enjoys the simple things in life: baseball games with his son, family days, barbecues, and date nights with his lovely wife.

Once a year for two weeks, Martin takes his son, Marty, to Quillon’s Covert, a rustic family cabin secluded in the beautiful California mountains. Since before those long days of learning to play ball, Marty has loved his dad, but as Marty matures, Martin starts to see something else settle in his son’s uncertain gaze. What’s there lingers a little more than it should, and it seems far more appraising than it once was.

As Marty shows every sign of taking the lead, Martin is faced with the tough choices most parents never see: lose his son by being a father, or try to balance what’s best for their relationship by being something… more.

But with another trip to Quillon’s Covert on the horizon, has the point of no return already begun?

An Excerpt from Quillon’s Covert

“You’ve been embezzling my underwear again, haven’t you?” Martin asked, interrupting the silence.

Marty’s jaw dropped and he scrambled for something to say.

“I swear, after every one of your visits, I have to make a trip to JC Penny before Mom notices my tighty-whities are missing. The least you can do is wash and return them after you’re done. You know, swap clean ones out for my freshly spunked-up ones.”

“Jesus, Dad. Sh-sh-shut the fuck up,” Marty said and ducked his chin.

Martin chuckled at Marty’s obvious mortification. “Hey, I’m kinda flattered, Scout.” His father leaned closer and lowered his voice. “Sometimes I wear the same pair for a couple of days when I know you’re about to visit.”

He brought the coffee cup he’d been sipping on up to his lips, and then offered an abashed shoulder shrug. “I don’t know…I guess…” Marty watched with curiosity as Martin stared into the fire, his features growing more serious. “I just know you enjoy it, and I wanna give you something to…ya know, hold you over until we get up here again.”

Marty smiled at the ruggedly attractive man opposite him.

“Sometimes it feels like a lifetime between trips,” Martin added.

JOSEPH is a born and raised Southern Californian—with a twenty-year stint of living in the Midwest. He loves the laid-back lifestyle of San Diego and considers himself lucky to live where people dream of vacationing.

LOUIS is a gay romance author born and raised in South Africa. He was a shy outcast who had few friends in school; generally feeling excluded and on the fringe of society. However, when he discovered gay romance and erotica in 2007, at the age of seventeen, his mind and world opened up.

He wrote his first story, A Better Life, longhand in a 197 page spiral notebook, on his bed every night with a pillow curled under his chin. Although the book wouldn’t be published until 2011, with the now defunct Silver Publishing, he found the experience entirely liberating. He’s considered himself a writer ever since.

Don’t forget to check out JustJen’s review of Quillon’s Covert to see what she thought of it!