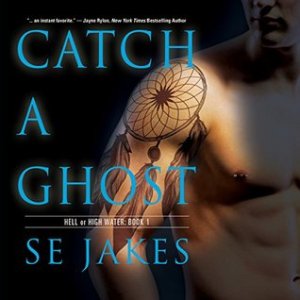 Blurb: Everyone knows that Prophet—former Navy SEAL, former CIA spook, full-time pain in the ass—works alone and thinks only about the trouble he can cause. But his boss, Phil Butler of Extreme Escapes, LTD., has just assigned Proph not only a new partner but also a case haunted by ghosts from Proph’s past. Suddenly, he’s got to confront them both head on.

Tom Boudreaux—failed FBI agent, failed sheriff, full time believer in bad luck—is wondering why the head of a private contracting firm has hunted him down to offer him a job. Still he’s determined to succeed this time, despite being partnered with Prophet, EE, LTD’s most successful, lethal, and annoying operative, and even though the case is also resurrecting his own painful past.

Together, Prophet and Tom must find a way to take down killers in the dangerous world of underground cage matches, while fighting their own dangerous attraction. And when they find themselves caught in the crossfire, these two loners are forced to trust each other and work together to escape their ghosts . . . or pay the price.

Review – Book: Prophet’s story is one that I was dying to read and so this re-read and audio listen was very high on my “to do” list. We initially learn about Prophet in the Men of Honor series and in the standalone, Free Falling…both of which are incredible reads that I highly recommend. I was very happy that Prophet was finally getting his story, but jeez…S.E. Jakes makes us work hard for it in this series.

Don’t go into this expecting a resolution to Prophet and Tom’s story…(or is it going to be Prophet and someone else)? For those new to this series, that is the question, I know the answer is Tommy, since I’ve read this series straight through, more than once, but beware this installment ends without our requisite HEA. And Cillian…wow, I was almost rooting for him and Prophet together, but nah….it’s gotta be Tommy. But, Cillian has a story, soon I hope.

Tom is a smoking hot mercenary and the perfect partner for Prophet. That is him on the cover and, oh man, what a great cover it is. His tattoos and piercings are great…especially when Prophet sees them through the airport x-ray machine the first time. LOVED that scene!!!He’s big, he’s bad, and he’s the perfect match for our resident bad-ass, Prophet.

I’ve seen a review that compares this to Ty and Zane in a couple ways, and have to admit that the thought crossed my mind as well. It is not a bad thing, trust me, but there are similarities. All in all, I love this spin-off series and highly recommend it, but do yourself a huge favor and read the other books first.

Review – Audio Book:  Just no. In order for audio books to work for me, I need a voice that matches the characters, at least a little bit. What we get is a mechanical voice that’s closer to Siri than two, tough mercenary, ex-special forces, alpha males. The Cajun accent for Tommy made him sound like he was an uneducated goofball, and I cringed over and over again. I must give the narrator, Adam North, kudos for his passionate love scenes though. He put his all into them, and I was a little wowed by his performance. But, all in all, he was not the voice I heard in my head when I read these books and don’t see myself listening the rest of the series.

Overall Impression:  I liked it