Book Review: Give Yourself Away by Barbara Elsborg

Posted on February 21, 2016 by thebloggergirls 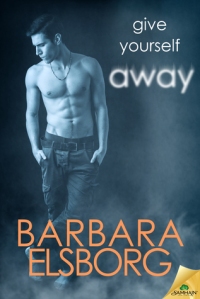 Blurb:  One guy intent on caution. One an adrenaline junkie. Love could be one risk too many.

March is determined to lose the numbness that accompanies a history of loss and blame. Desperate to feel something—anything—the adrenaline junkie base jumps off cliffs, soars on hang gliders, and embarks on dangerous sea-borne rescue missions. But any release he feels is fleeting, and when you play Russian roulette with fate, eventually you come crashing down.

No matter how hard Caleb tries to forget his past, a dark shadow is always behind him. When a bizarre turn of events results in him being trapped in a sea cave, Caleb wonders how his mantra—safety at all costs—could have failed him. On the point of drowning, he’s stunned when March surfaces in the cave.

March’s disregard for the rules saves Caleb’s life but gets March into a heap of trouble. Not least of which is the guy shivering in the boat next to him. March tries to ignore Caleb but it’s already too late. Together, they take small, awkward steps toward love. But Caleb’s past is waiting to sink in its claws…and this time, it could drag him to his death.

Warning: This book contains difficult flashbacks of child abduction and sexual violence, but also the incredible perseverance of two men who never give up on love—or each other. Bring your tissues and a heart that believes in the resilience of the human spirit.

Review: This story was a bit heartbreaking. You do have to suspend your beliefs a few times, but it is a really gripping story nonetheless. Caleb and March were childhood friends, but were separated. Caleb was taken and held captive for 12 years, used and abused. But he got free and made a new life for himself. There are flashbacks throughout giving glimpses of his ordeal.

March is a bit of a loose cannon, an adrenaline junkie who takes a lot of risks. It is taking one of those risks that brings he and Caleb together again, though it takes a while for them to figure it out. They shared a connection that was beautiful and easy to see. I loved the way Caleb never gave up and cherished life. It was a nice contradiction to March’s somewhat careless attitude.

There’s an interesting side plot going with Caleb’s past few boyfriends. I kept turning pages to get the answers and enjoyed the ride getting there. These guys where definitely soul mates, two halves of a whole, and it was nice to see them be able to enjoy that in the end.

It’s difficult to imagine how someone can escape the childhood Caleb had and come out shining, but he does just that and it was beautiful to see. If you can let yourself forget about the seemingly convenient coincidences and sometimes unbelievable accounts, at least I’m hoping they’re unbelievable, you should definitely give this story a try.