Book Review: Gay for His Southern Werewolf by Tabatha Austin

Posted on March 2, 2016 by thebloggergirls 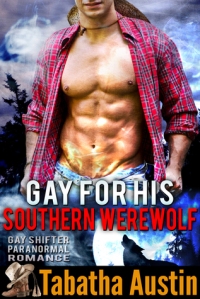 Blurb:  Ethan’s been in love with Gabriel, the boy next door, for most of his life. He’s not just the town’s tall, dark, and cutest man… he’s also a werewolf.

Without a cute man like Gabriel, there’s not much keeping him in his small Southern town. It’s time to put his foolish dreams behind. He’s going to leave his town – and Gabriel – behind forever.

With plans already set, Ethan figures there’s no harm in spending a last weekend with Gabriel up at his cabin. After all, they’ve been friends for so long. Once at the cabin, Ethan realizes that like him, Gabriel wishes things were different and knows how they could be. There’s one chance and it would mean that Ethan will have to leave behind more than just his town.

How much is he willing to give up for true love?

Review: I liked the idea of this story: humans versus werewolf – bigotry – no secret about werewolves existing– best friends to lovers – being gay in the South… all good and interesting themes. However – I didn’t care for the writing style at all.

There were intentional? mispronunciations – I think – to keep in flavor of the locale that threw me out of the story. Though I liked the ending, I felt it was kind of rushed and I didn’t really bond with the two MCs very well. There was a lot – A LOT – of speculation regarding the feasibility of having sex due to equipment size and not a lot of emotional bonding. The writing felt awkward and stilted. For example, Gabriel is frequently referred to as “the boy next door”- over and over. It’s a bulky way of referring to him when “Gabriel” or “him” would have been more fluid.

He held his hands out as if in presentation while his cock bobbed out proud.
Makes sense, it’s got a lot to be proud about.

My cock was painfully swelled. It felt like a balloon filled with too much liquid. I could handle it for a short while but soon I would explode.

“Okay, cute stuff. It’s time to give you what you want… what we both want. I’ll fuck you and won’t stop until it’s just us wolves.”

As good as the his dick felt, there was just something about someone that enjoyed my whole body. (mistake in book, not my typing)

My voice was a low growl when I spoke. “Please Gabriel. This is nice but I can’t wait anymore.” My nails dug into my palm. “Fuck me hard with your long country cock. Make me scream so hard, I scare the animals around us.”

The writing just kept jarring me from the story and forced me to re-read things for clarity causing the story to lose it’s momentum.

I love shifter stories and am willing to suspend my disbelief with the best of them, and I am definitely not afraid of a little cheesiness or kink – but I do need some emotional resonance and that I found lacking in this story.

This is just not a good fit for me – I can’t recommend it.

Overall Impression:  It was okay, but not good

One thought on “Book Review: Gay for His Southern Werewolf by Tabatha Austin”