Blurb: Liam Grady is the owner of the Feathered Quill, a quirky little bookstore in Asheville, and—though he doesn’t realize it yet—a dream walker. His last relationship failed almost a year ago, and he’s not had the interest or nerve to pursue anyone he’s met since.

Cameron Danu is a tattoo artist from rural Georgia. Cameron is left without a job after his boss, Jose, is forced to close the shop after a heart attack. When Cameron learns Jose has set up an interview for him at a small tattoo parlor in Asheville, he hopes for a fresh start in a new town.

Fate brings Cameron and Liam together, and they realize they’ve met before—in their dreams. A chance encounter and a winged tattoo might lead them to their destiny—if fear doesn’t turn their dreams into a nightmare.

Coming soon to Dreamspinner Press on May 13, 2016! Pre-order your copy here!

And the moment you’ve been waiting for! Dreamers’ Destiny cover reveal… 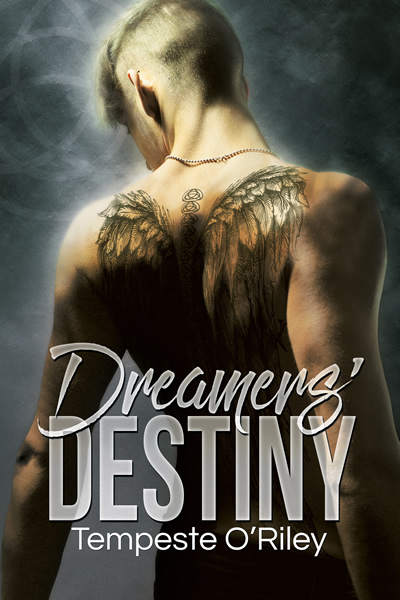 An Exclusive Excerpt from Dreamers’ Destiny

“Hey, man. Glad you could make it!” Bass said as he strode across the black-and-white checkered floor. He clapped Cam on the shoulder, a wide smile on his furry face.

Cam faced Bass, slightly intimidated by how huge the man was, the same as he had been the last time they’d met. Bass, short for Sebastian, was six-three, with wide shoulders and biceps as big as Cam’s thighs. He had a full beard, trimmed short and neat, giving the bear of a man a little smoothness to his rough. Of course, the fact Bass kept his head shaved added a little to the smooth too, but Cam wasn’t about to mention that.

“Any time. You saved me from rearranging the, like, two pieces of furniture I have all weekend,” Cam explained with a chuckle. He had more furniture than that, but he wasn’t going to explain all that right then.

“Good man. Now,” Bass continued, draping his arm across Cam’s shoulder and steering him toward a door Cam knew led to the room he’d be using for his own from now on. “Did you bring your things? Your designs and all too?”

“Of course. I have the rest of my gear in the car still. Figured I’d bring it in once I have things how I want ’em in here.”

“Cool. José said you had your own setup and tools, but I wasn’t sure how much was really yours. He also said you were a bit particular about your area.”

Cam tensed, knowing that his OCD about his tools and area could grate on people’s nerves at times. He didn’t want his new boss pissed at him already.

“Hey, none of that,” Bass rumbled, shaking Cam’s shoulders roughly. “As long as you respect my space, I’ll do the same for you. Besides, I want this place so clean the health inspector doesn’t even bother to stop by and inspires jealousy in the hospital OR.”

A chuckle slipped out at the rambling, glad his boss was more like him than he’d thought. “Great!”

Bass sat on one of the stools in Cam’s area. “Now, I’ve got a few more papers I need you to complete, but that shouldn’t take you more than a couple of minutes. I’ll help you bring in your equipment after that.”

Cam listened with one ear but started moving things around, preparing the area. “That’d be great. Oh, here.” He paused to pull his binder out of the backpack. He smoothed a hand down the cover before handing it over.

“This the complete one?” Bass took it carefully in his huge hands before he set it in his lap and opened the cover.

“Yeah. In the back are a few pieces I’m working on for personal use, but otherwise it’s all stuff I’ve done on others in there.” Cam continued rearranging the basic shop items for a few more minutes as Bass looked through the book.

When he was finally satisfied with the furniture placement and how the stands and other equipment were situated, he turned but froze at the look on his boss’s face. “What’s wrong?”

Bass turned so Cam could see the image that had caught his attention. It was the start of the tat he’d designed for his right deltoid and down onto the biceps a little.

“It’s so intricate and colorful,” Bass said, his deep voice soft. “Who’re you planning to have help you do it? You can’t do that level of detail yourself. Not at the angles you’ll need.”

“Yeah, I know.” That was the million-dollar question, really. “I had planned to have José do it, but since his heart attack… his hands aren’t steady thanks to the meds.” Now, he wasn’t sure.

“Come on,” Bass said. He closed the binder and set it down before he stood up and stalked toward the door. “Once you’re settled and comfortable here, we’ll help you get your next tat done.”

Cam beamed as he followed Bass out the door, happy to have found a place he thought could be a true home for him.

Tempeste O’Riley is an out and proud pansexual genderfluid whose best friend growing up had the courage to do what they couldn’t—defy the hate and come out. He has been their hero ever since.

Tempe is a hopeless romantic who loves strong relationships and happily-ever-afters. They has done many things in their life, yet writing has always drawn them back—no matter what else life has thrown their way. They counts her friends, family, and Muse as their greatest blessings in life. They lives in Wisconsin with their children, reading, writing, and enjoying life—especially now that they have joined the Sisters of Perpetual Indulgence® (as Novice Sister Eroti-Quill… can’t imagine where that name came from).