Audio Review: Names Can Never Hurt Me by Wade Kelly 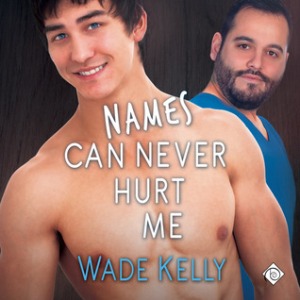 Blurb: What if sexuality wasn’t a definable thing and labels merely got in the way?

Nick Jones can’t remember a time when he wasn’t part of the in crowd. Everywhere he goes, he stands out as the best looking guy in the room, and women practically fall into bed with him. Then, after kissing Corey on a dare led to much more and on many occasions, Nick’s “screw anything” reputation escalated, but he didn’t care.

When Nick meets RC at the restaurant where he works, it throws his whole life out of whack. RC lives up to his dubbed nickname “Scruffy Dude.” He seems Nick’s complete opposite, but Nick can’t get him out of his head.

Because of peer-pressure and his fears about defining his sexuality, Nick struggles with stepping out of his comfort zone and caring about someone different than himself. If he’s lucky, somewhere between arrogance and ignorance, Nick might find out what it means to be an adult, but if he’s wrong, he could lose everything.

Nick Jones is a hard character to like, especially at first. He is a very self-absorbed, aimless young man, vain, wandering, screwing around in and through life. We are first introduced to him at a party where he is dared to kiss another boy for the first time, and lo and behold, “he kissed a boy and he liked it!” His reputation isn’t harmed by this little endeavor, it seems to merely open doors for more sexual exploration. Since Nick’s friends are mostly self-indulgent jerks, out for a good time, and (in the beginning) Nick fits right it, the first part of the book was frustrating – setting us up for the far more satisfying part of the book where Nick begins to grow and learn how to be a better human.

RC, Raffael Coppola, is an ex-fat kid who stumbles into Nick’s life via a sandwich shop. RC clearly has a crush on Nick, and though it takes him a little while to figure it out, Nick comes around to seeing RC as a friend, then more, until, finally, he is everything.

I love RC. Love him! He is sweet, authentic, kind, gentle, honest, funny and sexy. He has had a hell of a hard life, but still he keeps an open heart and open mind. I really appreciated his ability to take care of himself, standing firm in the face of temptation, and really being willing to get what he wants and deserves.

I also really liked the imagery Wade uses with RC’s use of contact lenses to hide his beauty and keep himself “hidden” from people’s attention, good or bad.

Corey Parrish is not technically an MC but he could be. He adds so much to the story and helps to shape Nick into a somewhat likable guy that he deserves a mention here. He is Nick’s first foray into gay love/sex and ends up being almost a brother to Nick. He’s a flamboyant, lip-gloss wearing gay boy and he is so sweet and sexy it was hard to not root for him and Nick, at least a little, and I was so glad we got to see him find his own HEA.

What makes this book so good are these characters and how they relate to one another. Wade Kelly does an amazing job of creating realistic, flawed-yet-wonderful people that you grow to love. Nick’s friends are perfectly skeevy and a perfect contrast to Nick’s parents who are amazingly caring and supportive yet dopey in their own way. I love how we see the natural evolution of growth and understanding – how at first some of the enemies turn into friends, once people cut through the crap and start to see the real people beneath the exterior. Life isn’t black and white and people do make mistakes and poor judgments and it takes real strength of character to move past that and let things go.

My complaints about his book are two-fold:

One – the length. It’s pretty long and though it is very rich and well written, I think it could have been edited tighter and made the story move at a better pace.

Two – Nick. I didn’t quite feel like Nick deserved RC enough. He comes a long way. But he had a really long way to come. He was kind of a dick in the beginning of the story, and he made up a lot of ground, but I have to be honest… I’m not sure he made it to “good enough” by the end. I was also conflicted because I was feeling kinda attached to Corey so I was slow to warm up to the RC/Nick combo. Of course, I absolutely adored the romance between RC and Nick. RC is so effin’ adorable that you can’t help but root for his happiness and it was clear he was so, so happy with Nick. So… It’s ok. With RC as his partner, some of that goodness is bound to rub off (heh heh) and I’m sure Nick will complete his growth process, and keep our RC quite happy for years to come.

Overall I enjoyed this book, loved the topics Wade fearlessly tackled and the relationships she allowed to grow and change over the course of the story. It was sweet, sexy, sentimental and an excellent read. I recommend it!

Review – Audio: I think that the audio format – narrated by Jack Amber – highlighted some things that reading this book hid.

First, Jack Amber is a new narrator and his reading style is somewhat like an early Keanu Reeves in Bill and Ted’s Great Adventure. His style works great for the dialog – because this is a very dialog driven story – and most of the characters are young – I think he’s a good choice for narrator. His narration during the non-dialog parts are a less good, but still easy to listen to.

One of the things that happens when I listen to a book is that any flaw seems magnified. For me (at least), my mind can skip over some minor issues as inconsequential when I’m reading but as I listen – probably because I’m forced to slow down and really listen to each and every word rather than skim – I’m far more critical then when I read.

In this case, as I heard Jack’s surfer-style voice read the dialog, it was highlighted to me how unrealistic some of the conversations were, as well as how … unlikable I found Nick at times. He was just so oblivious and conceited and far too shallow for RC.

I think, now having read and listened to this book – as well as seen other reviews for it – that this book would do better as a YA focused book – take out some of the explicit sex scenes and focus on the more “teachable moments” of acceptance and target the YA crowd.

I think if you enjoyed the book, you’ll enjoy the audiobook, and if you’re a fan of YA, this is a good audiobook for you.

(I liked the original cover much better than this one – the nametags were a much “stronger” message I thought.)