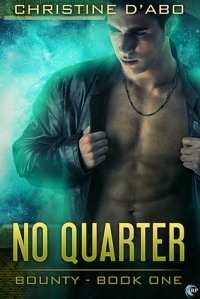 Blurb: When bounty hunter Gar Stitt is given a simple locate-and-retrieve mission, he’s convinced it’s a waste of his skills. His success rate is legendary, after all, and Captain Faolan Wolf isn’t hard to find. He’s the most notorious pirate in the galaxy, and when he shows up planetside to take his pleasures, he’s far from subtle.

Faolan never expected a hot but tightly wound hunter to walk into his private party and try to apprehend him single-handedly. And when an unexpected betrayal forces them to work together, Faolan’s even more surprised to find himself drawn to Gar personally—especially since neither of them do personal.

Gar had intended to put Faolan in prison. Instead he finds his solitary existence shaken by his desire for the pirate. And when the bounty hunter becomes the hunted, he must put his faith in Faolan and his pirate crew, or run the risk of ending up dead.

Review: Okay, this was a big shocker for me because I do not normally read, nor like, sci-fi. But, something about the blurb and the cover kept calling to me so I decided to give it a shot, and I am so glad I did. I loved both Gar and Faolan, and can’t wait to see what happens in the next book. I know Gar’s sister, Mace, take center stage, and I rarely read MF, but considering the blurb states that they are still searching for a cure for Faolan than I will read it anyway. I will need me some sexy Faolon and Gar time.

Seriously, these guys were a riot. They both have heavy issues that are slowly revealed, but Faolan is hilarious, and Gar is initially uptight, but sexy as sin. The sex between them was off the charts and I loved the constant and humorous bickering. Any story that has great dialogue works for me. I need that in my books like I need air to breathe. I’ve never read this author before, but if all her books are like this than I will surely start.

So, this story takes place on space ships and distant planets. Again, not normally my thing, but the interaction between the characters, both primary and secondary, was very well written, highly developed, and kept me vested. I was so invested that I’d read this novel in one sitting. That’s 240 pages, people, and rarely happens for me. So, don’t let the fact that is sci-fi hold you back. I am really glad I listened to my gut and gave it a chance. I’m looking forward to seeing where Faolan and Gar go from here.