Book Review: After the Snap by Peyton Miller 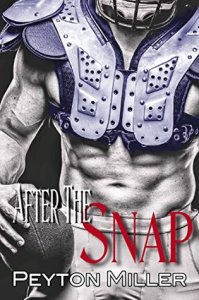 Blurb:  Seth Mercer is at the top of his game when a secret threatens to topple him. Lust draws him into a dark pit and he’s unsure how to break away from a destructive force. Angry at himself, and his mistakes, he vows to never enter into another relationship again, until he has a special hook up with Colby.

Colby Larsen learns the truth about his ex and is devastated. He throws himself into his work, vowing to never get emotionally involved again. When he meets Seth, Colby is unprepared for how connected they become.

Seth has a secret and he can’t tell Colby. Colby can’t accept betrayal of any sort after being fooled by his cheating ex. When he finds out Seth has been hiding important information from him, will it end their relationship or draw them closer together?

Review: This one called to me right away. Perhaps it was the cover, or wanting to see how a closeted pro player makes it work, either way, I was excited though it started a bit differently than I was expecting.

Seth is still in college when this story starts. He knows he is gay but has not had an opportunity to do much about it, instead focusing solely on football with making it to the NFL as his incentive and goal. He ends up in a very unhealthy relationship that he thankfully breaks free of once he is drafted and moves to San Diego to start the season, his focus once again on his career. I was pretty disgusted with everything about this relationship but thankfully it doesn’t tarnish Seth for his future relationships or how he thinks things should be.

Colby has vowed off relationships after he walked in on his bf with another guy. A business trip and potential move has brought him from Atlanta to San Diego where he is hoping to make a new start. He has vowed of relationships, but decides one-night stands are doable.

Seth is now a pretty-well known quarterback in the NFL when he decides he needs to find someone for a hookup. He lucks out when he meets Colby at the bar, as Colby is a bit of a geek and hasn’t the first clue about who Seth is. These guys share an amazing night together and realize they want to see each other again. Things continue with who Seth is remaining relatively unknown to Colby. This was great in that Colby fell for Seth the person, not Seth the star QB, but it was also a bit of a deception, of which Colby vowed to never experience again.

When Seth’s past relationship comes back to haunt him, and his identity is made known to Colby, things pretty much hit the fan. But they realized how much they meant to each other, saw through the bad stuff to see all the positives, and worked together to make it work.

I really enjoyed this story. Once I got past the bad taste that was Seth’s first “relationship,” I was really sucked in. I loved everything about Seth and Colby and thought they were the perfect combination. I also really enjoyed the football aspects in this story and thought they were very well done. If only it were that easy and teams as accepting as Seth’s was, I’m sure we’d see a lot of this happening in real life. This was a long story, but I never felt like it was dragging out. In the end, I wasn’t ready to say goodbye to these guys. This was a great debut novel from Ms. Miller, and I will definitely be looking for more from her in the future.