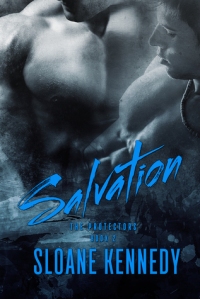 Blurb: Trauma surgeon Ronan Grisham lost everything the day the man he loved was stolen from him in a brutal attack. Driven by a thirst for vengeance, he turns his hatred into building an underground group that can do what he couldn’t that fateful day…take the lives of the guilty to save the lives of the innocent. But years later, he’s forced to confront the one link to his past that he can’t sever.

Seven years after the loss of his parents in a violent home invasion that left him permanently scarred both inside and out, 21-year-old Seth Nichols is trying to put his life back together so he can take over the reins of his father’s global shipping empire. But the last person he expects to come back into his life is the man he drove away with one innocent, stolen kiss.

With one brush of his lips, Seth managed to do to Ronan what no other had since the day Ronan watched the light in his fiancé’s eyes go out forever. He made him need again. But Ronan can’t need anyone, least of all his dead fiancé’s younger brother. Because even one touch from Seth could shatter Ronan’s carefully constructed world and Ronan knows there’s no coming back from that a second time.

But when a series of escalating attacks against Seth forces Ronan back into his life, Seth knows it’s his last chance to show Ronan he can be the man the broken surgeon needs. Only the Ronan who returns isn’t the Ronan Seth fell in love with so long ago…

Can Seth be Ronan’s salvation or will he end up destroying them both?

Review: I was really looking forward to continuing this series, checking in with the guys from book one, seeing what made Ronan tick and where his story would lead. As I started, and probably the first half of the book, I found I was starting to get a little bogged down with the heavy angst and had to switch to something a little more uplifting. Don’t get me wrong, it is a great book, but back to back angst-fests sometimes require a little fluff in between them. So, I immediately came right back and for some reason the story just took off. I was, at first, thinking I would be finished with the series after this book, to being excited about reading the third installment. I guess what I am trying to say is that this book, and this series in general, will scatter your emotions all across the board, but it is really well written and if you can get passed all the emotional roadblocks you will find a great story.

Ronan and Seth take the cake on damaged and tortured souls. Both had major, and I mean super-duper major issues to overcome. How they could even become a couple with all that was between them is amazing. This story is full of pasts that include violence, murder, and rape. It is definitely not for everyone. Even though the acts are not on page at the time they occur, they are described in pretty graphic detail. That is not a deal breaker for me, but others will need to be forewarned. I am assuming if you read book one, you can handle this one, too. I am not going to go into any summation of the book, the blurb is pretty spot-on, but I will tell you that you can take that blurb and exponentially increase the damage that was done to our protagonists.

In the beginning, I was a little unsure of Seth and Ronan as a couple. The fact that Trace was Seth’s brother kind of gave me fits. I got over it, but it makes me wonder what would have happened in the long run had things been different.

Now that I’ve decided I am going to read on, and after I read the prologue for book three, I am super excited for Hawke’s story. But, I digress, if you love your men damaged, both inside and out, this one is for you. If you don’t mind a little age difference, a book full of angst, and lots of violence, then this book is for you, too. If you want all that and a happy ending, too…then this book is for you.