Posted on June 4, 2016 by thebloggergirls 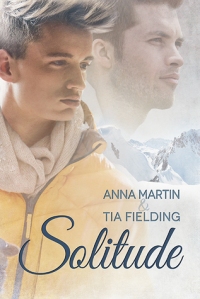 Rumors run rampant that Liam is dead. But Gael doesn’t believe the gossip. Knowing something is wrong with Liam, Gael hunts him down to get his answers.

Liam is shocked when Gael turns up in Solitude and takes up residence. To Liam’s chagrin, Gael is determined to stick around to help Liam through whatever spooked him enough to run away. As Gael breaks through Liam’s armor, both men begin to realize that no matter what life throws their way, they don’t have to deal with it alone.

Yet, this relationship between Gael and Liam is a lot of work. Liam has major history that needs to be dealt with, and Gael is just the guy, with a heart of gold and the patience of saint, to do it. Liam has family drama, not on page fortunately, but the issues from his past forge the path of his future. Even by the end of the book he is not miraculously cured. This, at first, surprised me but after awhile it made sense.

Liam is a tragic character. Even at the end of the book, my heart was broken for him. Gael was everything that he needed, plus some. I wasn’t thrilled with his rent boy activities, but I think my reasoning was similar to Gael’s in that it just isn’t safe. But, these are grown men, and they, as a couple, get to make their life choices, and we, as readers, just have to suck it up, Buttercup.

As for the style of the book, I was initially put off by the fact that each chapter was written with alternate POV’s, which isn’t an issue, but the fact that they were in two different time frames took a lot to get used to (Gael in the past, Liam in the present). Fortunately, the guys were finally on the same date around chapter five or so. Not sure why it was written that way, and it was not something I would prefer, but it didn’t take too much away from my enjoyment, especially since things were picking up once they were together. So all in all, it was great porn star/rent boy book and one I highly recommend.