Posted on June 6, 2016 by thebloggergirls

Reviewed by Morgan and Nikyta 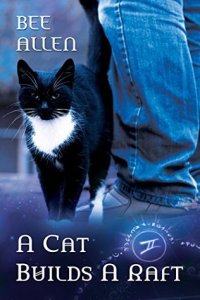 Blurb:  Families, Zeke knows, are complicated… and shapeshifter families are a whole other ball of catnip. Ten months ago, Zeke went off the Schuyler clan radar, determined to live a painless life of luxury as a housecat. It was a fantastic decision: his human, Toby, feeds him, cuddles him, and loves him with all the simple devotion he could ever want. Sure, he sometimes feels the desire to know Toby on a real, human basis, but it’s squashed by terror and inertia.

But Zeke isn’t the only one with a complicated family. A break-in heralds the end of Zeke’s fantasy life and throws him headlong into a new drama. Toby’s family is from the sea, where conflict is resolved a little differently. Zeke will have to use all his feline cunning to get him and Toby out of this mess safely—and both men will have to confront their fears, their families, and their future.

Zeke apparently grew tired of his life as a human, and decided life’d be better if he was a cat, all the time. For the last several months he’s lived as a house cat and is now almost fully invested in the cat mentality as a result. He loves his human, Toby, and really, wouldn’t ever change a thing…until Toby ends up in danger.

To say much more would give up the story, but there’s a bit of (confusing) danger and some shifting, and a point where Zeke’s cat-love turns into the human equivalent.

I really liked the world building and thought the story itself was pretty interesting.

I was not, however, really invested in the romance. I think this is a case of too much story and not enough words. We spent so much time building the world that there wasn’t much space left for the romance.

However, it’s a sweet, very interesting and unique shifter story, and fans of the genre should check it out.

I really enjoyed this story! I loved that Zeke gave up his life as a human to be a house cat and that Toby took him in. I loved that Zeke was so lazy and pampered. It was adorable seeing him as a house cat but I especially liked that when Toby’s life was in danger, he worked past his fears and cowardice and saved Toby. It was interesting to read this story, though, because Zeke isn’t a natural born shifter, he wears a pelt. I’ve always loved shifters who wear pelts but at the same time, Toby was born from shifter parents but can’t actually shift. It was intriguing to see the differences but also the similarities and the change of their relationship from cat/human to human/human.

My complaints about this one are pretty much the same as Morgan’s with not really understanding the danger because it all happened so fast and was more told than shown but also not really understanding why his brothers hated him so much. I wish the story had focused more on building the connection between Zeke and Toby as humans than on giving so much backstory.

In the end, a super cute story about a cat shifter and an otter shifter who can’t shift. I loved that Zeke pushed passed his fears and how he stuck up for Toby. I’d love to read more about these shifters and this world so hope it’s not the last we see of these two!

*We received a copy of this book from the publisher in return for fair and honest reviews.*