Audio Review: Waiting for the Flood by Alexis Hall 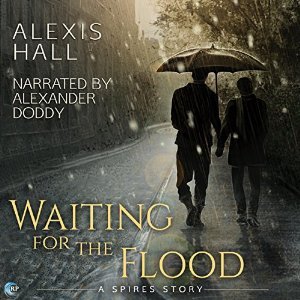 Twelve years ago, Edwin Tully came to Oxford and fell in love with a boy named Marius. He was brilliant. An artist. It was going to be forever.

Two years ago, it ended.

Now Edwin lives alone in the house they used to share. He tends to damaged books and faded memories, trying to a build a future from the fragments of the past.

Then the weather turns, and the river spills into Edwin’s quiet world, bringing with it Adam Dacre from the Environment Agency. An unlikely knight, this stranger with roughened hands and worn wellingtons, but he offers Edwin the hope of something he thought he would never have again.

As the two men grow closer in their struggle against the rising waters, Edwin learns he can’t protect himself from everything—and sometimes he doesn’t need to try.

Review – Book: Edwin’s lover of a decade has left him, seemingly without much notice, leaving him a very lonely and slightly bitter almost-hermit. He loves his job/hobby – restoring old books – and that’s about it.

When Edwin’s little cottage faces the immediate danger of encroaching flood waters, he meets the engineer in charge, Adam. Adam is everything Edwin isn’t. He speaks well and frequently, he’s outgoing and sunny and – for whatever reason – he likes Edwin!

This is a short story and most of it is spent inside Edwin’s head. He has literal holes in his life where Marcus, the ex, was that gape open, wounded, and this occupies much of his thoughts. Edwin’s self-esteem, which has never been high due to his stutter, is at an all-time low, so this is a pretty depressing place to be.

We don’t get to see much of Adam or really understand his attraction to Edwin. Their romance happens with a few chats around a kitchen table and on the street and goes from zero to sixty almost overnight.

Alexis Hall’s writing is poetic and graceful and full of wonderfully lyrical words and unique phrasing. To that end, this is a lovely story.

What didn’t work for me was the distinct lack of any real struggle, the fact that Edwin really didn’t feel at all ready for a new romance, and the absence of much relationship building.

I appreciated the significance of the link between re-making the books and re-making Edwin’s life and it was pretty and poetic, but I wasn’t ever convinced of his repair nor was I that involved in his new “relationship” as it felt a minute old.

Review – Audio: One thing that absolutely elevated this experience for me was the fact that I wasn’t reading this book but listening to it and the new-to-me narrator, Alexander Doddy, totally won me over! He did an amazing job with this. His stutter was fantastic and he gave both MCs very distinct voices and accents without going over the top. I loved his pacing and cadence and felt far more immersed in the story than if I’d read it, as I’d have been tempted to skim, whereas he held me captive.

Impression – Book: It was good

Impression – Narration: It was amazing