Book Review: Out for a Hero Anthology

Posted on July 1, 2016 by thebloggergirls 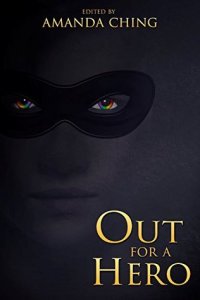 Blurb:  It’s not easy being a superhero. Sometimes it’s even harder when you’re super and queer. In Out for a Hero, LGBTQ heroes find themselves in tight spaces, moral quandaries, and sometimes heated romance.

In The Integrals, Kaveri, the daughter of two super dads, struggles to conceal her possibly criminal crush. But when Morning Glory clashes with her parents’ team, she has to decide how to work with her own developing powers to save the day, and her girl.

Sparks highlights the complications of an after-hours club where both superheroes and villains go to mingle. When Ignition meets Fusion, the leader of a supervillain group, she’s forced to dig deeper into the group’s activities to discover just who’s being wronged.

Patrick has a reluctant grasp on his own gift of fire extinguishing, and he recalls the day it took his lover, Victor, away in Firebreak. As he tells the story to Nissa, clues emerge that indicate that Victor might not be so lost after all.

In DVDRW, a hero with the ability to rewind and replay time falls in passionate love, or lust, with Michael, a normal human with bad connections. What starts as fixing horse races escalates into military exercises, until it’s almost too late to back out.

The hero of Pedal to the Mettle finds that transitioning is hard enough, but doing it when you’re a super-powered alien brings a whole set of troubles, until Floyd, another alien who just wants to go back home, makes him an offer he can’t refuse.

Lastly, in A Memory of Wind, Yeni investigates the secret of missing passengers and empty quarters on the starship that is her home. Her search for answers leads her to Wind, a flying woman who can help her learn what she needs to know.

Review: This is a very unique collection of short stories about people with “super powers” – think “The Incredibles” – and each are LGBTQ. Some of the stories are romantic, like the story about Morning Glory, but most are about some other aspect of their lives.

If you’re a fan of comic books and super hero type stories – this has the unique twist of having queer characters. In one, the issue is the superhero coming out as being gay, in fact.

If you’re looking for a romance, this isn’t really that.

The writing was good, although there were a couple done in first person present tense, and those are always a bit more difficult to get into.

All in all, it was unique, but definitely not what I was expecting.