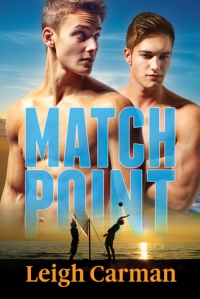 One is a rude jerk. The other, the life of the party.

It was hate at first sight.

Pro beach volleyball players Finn Callahan and Dexter Savage have been rivals since college. While Finn always comes out on top on the court, Dexter’s carefree and fun-loving personality earns him scores of adoring men and women. And as much as Finn fights to deny it, there’s another reason for the tension he feels when Dex is around. Hate wasn’t the only thing he felt when he first laid eyes on his opponent.

When they’re forced to team up, the two men must bury their differences—on and off the court—if either of them is going to succeed professionally.

Review: I loved this book. Here I was expecting a hot and steamy, fast and easy, switch from enemies to lovers. Didn’t happen; these two guys really did hate each other, and to top it off, Finn was already totally in love and committed to another. I admit I got nervous when I started this book because there were really only one of two ways that relationship could end so that the Dex could fulfill his role and become main character number two. Poor Tris, I really did like him.

I love emotion in my books, and dialogue is a make-or-break for me. This story has both…in spades. I was actually sad to see it end, but it ended perfectly. I have never really paid any attention to men’s beach volleyball, I hated playing it in school, but I now want to see a match, live, so I can drool. I had no idea that was even a real career choice.

Finn and Dex do not make it easy. Their competitive natures and history make it almost impossible to believe they could become friends, let alone lovers. One of the things I liked most was that their animosity doesn’t end fast or easy. They really do have to work hard for it. I think the only parts I struggled with was the quick jumps in time at the start of each chapter. I think I would have loved this story a bit more had the book actually been longer so that I could see how certain scenes played out. Oh well, can’t have everything and it really did not take away from my enjoyment.

So, from my words above, you can assume that I will recommend this book and highly so. It’s sexy, saucy, emotional, and the struggles are real. I am going to have to see how the other books in this series play out. If they are anything like this one I am sure I will love them, too.