Posted on August 29, 2016 by thebloggergirls 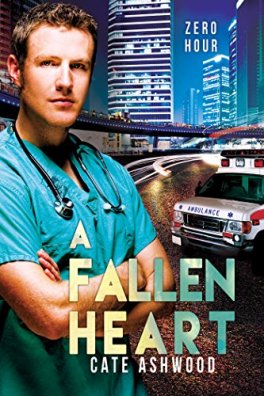 Blurb: After his last disastrous relationship, Joseph Ford has absolutely no interest in getting attached again. Concentrating on working as a trauma nurse and keeping his life as simple as possible are his only goals. Unfortunately, his plans could be derailed by the charming, sexy Nash.

Things are looking up for paramedic Ridley Nash when he transfers to Station 217. He gets along with the crew, likes his partner, and is finally on a team willing to accept him—gay and all. It’s everything he’s always wanted, but when he meets Ford, Nash knows his life is about to get very interesting.

As Ford and Nash find themselves stuck in the middle of a homicide case, things become more complicated. For the last year, the mutilated bodies of teenage boys have been showing up all over downtown. With no leads, the police are getting desperate. One of the victims is found alive, and he’s the best chance the police have to catch the killer—if only they can get him to talk.

Will Nash be able to catch Ford when he falls, or is there too much standing in their way to make it work?

I loved the first book of this series, Zero Hour, so I jumped into the chance of being able to read and review the ARC. Safely to say, I thought this was also another winner from Cate Ashwood – although with some disappointment points (what can I say, I’m difficult *LOL*).

Let me get ahead with what I enjoyed first.

Despite the mixed-signal that Ford have given Nash, in addition to his childish fear which resulted in my wanting to knock Ford’s head with wooden spoon a couple of times … I still thought that the relationship progressed really well. Ford was tentative in pursuing further steps based on his previously horrible relationship but I loved how Nash dealt with it. Nash was the adult here and I totally LOVED him whenever he confront Ford’s bullsh*t reasons, you know?

“All right, Ford. You want to have an adult conversation about feelings and shit? Here we go. I like you. More than I should … You’re scared absolutely shitless. But I’m not him. I want to touch you and kiss you and fuck you and hold you when you sleep. I think you want that too….”

Whenever Ford wanted to retreat, Nash was having none of it. Nash forced Ford to deal with his fear and his comfort zone, which I thought was really good for Ford. Nash was definitely my favorite character compared to Ford here. I guess I was able to tolerate Ford for Nash’s sake *haha*

Oh, all right, Ford wasn’t all BAD. I loved his compassion and attachment for patients. I loved that he loved his job as an ER nurse, despite it being difficult at some days. People who are that dedicated with helping others deserve my admiration (even if Ford sucks at relationship).

Ashwood was able to break my heart regarding the victims. I hate it when the murder / crime involved kids/teenagers. So it was hard for me to read about the case, especially in regards to one particular victim. I was as a wreck as Ford.

Now having said all that … I was again disappointed with how Ashwood approached the resolution of the murder case, especially because of the ending. I understand that neither Ford nor Nash are part of the investigation team, considering they work as nurse and paramedic respectively, so they cannot exactly look for clues regarding the murder cases. However, this book also categorized as Mystery/Suspense at publisher’s website, and for me the mystery part was underwhelming.

First, the mystery was pretty much in the background. Then the villain was revealed quickly near the end, and the ending was a cliffhanger for the mystery – which pissed me off to no-end. Why put an ending as a ‘mystery-bait’ when the bulk of this story is all about the romance? Heck, neither Ford nor Nash were victims or even being threaten by the case throughout the book. At least if they are, maybe I can still consider it as romantic suspense. Oh, and that cliffhanger was titled as EPILOGUE.

ARGH!!! Yes, it was deeply frustrating for a mystery lover like me.

In overall though, what I enjoyed won over my frustration. I hope book #3 can be more solid in terms of the mystery. Or if not, just don’t give those mystery baits…