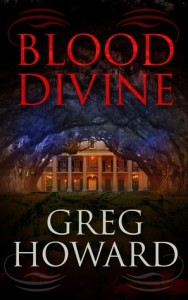 Blurb: Cooper Causey spent a lifetime eluding the demons of his youth and suppressing the destructive power inside him. But a disconcerting voicemail lures Cooper back home to the coast of South Carolina and to Warfield—the deserted plantation where his darkness first awakened. While searching for his missing grandmother, Cooper uncovers the truth about his ancestry and becomes a pawn in an ancient war between two supernatural races. In order to protect the only man he’s ever loved, Cooper must embrace the dark power threatening to consume him and choose sides in a deadly war between the righteous and the fallen.

Review: Wow! Now that is how you write a paranormal slash horror slash MM romance novel. This book has it all and is written in such a gripping manner that I just could not put it down. We have some serious paranormal action commingled with a budding love affair. The only thing I would change would be to make it a little bit sexier. We all love some sexy time, yeah?

This book is like a marriage between Dean Koontz and Stephen King with their love child being a famous gay romance writer. The paranormal war and the unraveling of the mysteries of the Anakim and Jericho war take up the lion’s share of the story, with the reunited flames of romance between Cooper and Randy acting as the fluff to keep the horror aspects at bay. This story isn’t really scary, per se, but it is suspenseful and violent; and exactly how I like my paranormal, horror, gay romance novels to be written.

Cooper is much more than I expected after I’d read the first chapter. So much more, and the more I read, the more complex his life became. Randy is his childhood crush, one who he doesn’t believe returns the sentiment. But Randy has a story of his own to tell, and it doesn’t stop until the last page.

I admit, I expected something completely different, but what I got was so much better. My only issue is that with the way it ended, I can only hope that Greg Howard has a sequel up his sleeve somewhere. This story is not over, at least I hope not, and I would tag it as more a happy for now than a happy ever after. Cooper and Randy, Stephen and Betsy, and the rest of the players in the war game have a whole new set of problems to face so I implore the author to continue this book with a sequel, please.

Highly recommend to everyone!