Posted on October 11, 2016 by thebloggergirls 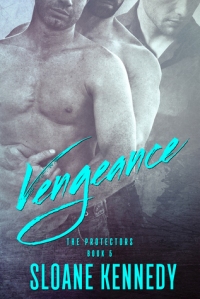 Blurb:  Memphis
At thirty-four years old, ex-DEA agent Memphis Wheland has lived, loved and lost…everything. The ultimate betrayal by the man he gave everything to has left Memphis with no family, no career and a bone deep bitterness that refuses to release him from its icy grip. His work with an underground vigilante organization is the only light in his otherwise bleak existence. That and the occasional no-strings hookup with men whose only focus in that moment, and for as long as Memphis wants them, is him and only him. No clingy exes, no unrequited love, no relationship drama. Period.

Because Memphis has one rule that he won’t break for anyone or anything. He doesn’t share.

Brennan
With his entire life ahead of him, graduate student Brennan Devereaux wasn’t expecting it to change in the blink of an eye. But when a case of mistaken identity nearly costs Brennan his life, it isn’t just his future that’s about to change, but his past too. Because for years he’s been in love with a young man who only sees him as a friend and nothing more. And while he was content to love Tristan Barretti from afar, he hadn’t expected to be drawn to the mysterious stranger who saved his life and changed it with a simple promise.

I’m not letting you go.

They were words spoken in the heat of the moment as the darkness of death had threatened to claim him, but even as Brennan’s love for Tristan refuses to wane, his need for the intriguing Memphis Wheland continues to grow.

Tristan
At nineteen, Tristan Barretti should have had the world at his feet. His musical gifts have garnered him prestige as well as admission to the famed Julliard School in New York and he has a family that most people would kill for. But the protective bubble his fathers have kept him in has burst and he’s discovered that life outside his unconditionally loving family isn’t as accepting of a kid born with HIV. A poor decision to find answers to questions better left unasked, along with the complications of living with his disease, have Tristan returning to Seattle and the solace of his family.

And to the young man he’s wanted from the time he was barely old enough to even understand what that meant.

But with an uncertain future that leaves him nothing to offer the gorgeous and successful Brennan Devereaux, Tristan knows the best he can hope for is to keep building on the friendship they’ve shared for years and not get his hopes up that Brennan will be the one man who sees him and not his disease.

Except all bets are off when danger follows him home…

Choices
Even though a physical relationship with Brennan was supposed to be just that, Memphis finds himself unable to refuse his young lover’s request to help put a stop to the threat against Tristan. Even knowing full well that Brennan’s heart lies with the man he claims is nothing more than a friend, Memphis accepts the challenge of ensuring Tristan’s safety.

But when the quiet music student stops being a “job” and starts being something much more, Memphis is torn between his growing feelings for both young men and the fear that he’ll be facing an even greater betrayal that he’ll never be able to come back from.

Except none of that matters when the threat that Memphis never saw coming puts Brennan and Tristan in the crosshairs.

Review: This is a great series that all basically carry the same theme – damaged and jaded alpha male falls for damaged younger guy(s). This installment is similar but with a few added elements that change the story up a bit. They are all really enjoyable, though this was my least favorite of the series so far. It could be read on its own, but the characters are all connected, so there is definitely some backstory you’d miss by doing so.

Memphis is the tough-as-nails mercenary who saved Brennan in the previous book. Brennan is friends with Eli, who was the actual target when Brennan was shot. This story takes place not long after that took place. Brennan is healed now and finds he has an even bigger interest in Memphis after meeting him again under different circumstances. Memphis is extremely jaded after his last relationship and is not looking to enter into another one. But, Brennan is persistent and it pays off.

The two carry on a sex-only (one of Memphis’ many rules) relationship, but little by little, it grows into more. In the meantime, Brennan’s friend Tristan moves back to share an apartment with him. Tristan is the adopted son of Dom and Logan who was born HIV positive. He and Brennan have been friends for ages, though Brennan has had a crush on him for much of that time. Brennan pretty much gave up any idea of them being more believing Tristan to be straight. Such is not the case though, and when Brennan finds out Tristan is gay, it puts a bit of a wrench in things since Brennan realizes he is in love with Memphis as well.

Memphis and Tristan start bonding after Brennan brings Tristan to Memphis after he is attacked by thugs after his bio-dad. There is a bit of drama and excitement surrounding that, and quite a bit more when Memphis’ evil ex returns causing trouble. That part felt a bit over the top and unnecessary to me, but it was that event which set things in motion for them to all really come together.

There were a few things that gave me some trouble with this book. First and foremost was the age issue. Tristan is only 19, Dom is 34, and Brennan is somewhere in between though closer to Tristan’s age. I don’t mind May/December relationships, but one of the MCs being that young was hard for me. Surprisingly enough, Tristan was more often the most mature of the three. It was hard not to feel for his character, having been dealt a really crappy card right from birth, followed by a more crappy upbringing and an even crappier father. Thankfully, he was adopted by two amazing dads who did everything in their power to make Tristan’s life better.

I think a side effect of the age gap issue made it difficult for me to really feel the connection between Memphis and Tristan. One minute, Tristan is a naive young man, the next, he’s in love with someone he barely knows. It isn’t until late in the story that Memphis finally opens up more to them about his life. Brennan is definitely the solid center of this sandwich with a strong connection to Memphis and Tristan.

As with the previous books, it is well written and easy to read. It keeps you engaged until the end and leaves you excited for the next book. Speaking of, boy does the next one look exciting. Dante and Magnus are up, and both are a little older, both alpha males, and if the sneak peak at the end of Vengeance is anything to go by, it looks like it will be full of hot and steamy, dirty talking goodness. I can’t wait!