Posted on November 5, 2016 by thebloggergirls 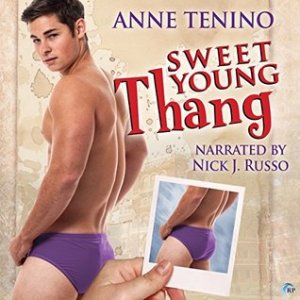 Blurb: Thanks to Collin Montes, Theta Alpha Gamma now welcomes gay and bisexual students. Persuading his Uncle Monty, president of the TAG Alumni Association, that the open approach won’t adversely affect TAG’s reputation is Collin’s own first step toward coming out. As long as there are no repercussions, he’ll escape the closet by graduation.

Enter repercussions, stage left: someone rigs the TAG House water heater to launch through the ceiling, then plants a bomb—thankfully unsuccessful—in the fraternity’s basement. Now Collin has his hands full not only trying to convince his uncle that this might not be the work of homophobes, but also dealing with a fratful of brothers worried about their kegger fridge.

Paramedic Eric Dixon can’t stop thinking about the kid he met during a call at his former college fraternity house. The age gap between them is trumped by sexy eyes, so when Eric sees Collin again at the bomb scene, he pursues him. Soon, Eric is dreaming of being a househusband, fighting to keep Collin safe from whoever’s trying to destroy the fraternity, and helping his sweet young thang realize that repercussions sometimes have silver linings.

Review – Book: We’ve met a lot of these characters in books one and two, TAG is now an “accepting” fraternity (no specific policy changes just more open about their acceptance) and there’s concern that this is going to cause trouble. Collin is working with alumni to try to avoid this, but somebody (related to the new changes?) is trying to wreck everything!

During one of the catastrophes, Collin meets Eric, the paramedic. Eric is older and really wants to find a nice person to settle down with – long term. Though they have eight years between them, when he meets Collin, he thinks (knows?) it might be him.

This was actually pretty low-angst if you look at the relationship part of the story. The drama is really almost all about the “mystery” and the TAG house bombing, etc. Eric and Collin have some stuff to work through, but, by and large, it’s fairly uneventful.

The chemistry between these guys is HOT and the feels between them are absolutely ooey gooey wonderfulness. I think one of the main things I loved about this story was it’s unabashed “cooing” between the two MCs. They are not shy about falling for the other and letting it be known. It was refreshing!

Anne’s books are usually chock full of humor and this is no different. The boys’ dialog with one another is especially funny. It was great seeing the TAG boys pull together in support and “solve” the case!

If you enjoyed books one and two, you’ll love this as well and you’ll be happy to see our previous MCs again.

Review – Audio: Mmmmm. I love Nick J. Russo’s narrations! He’s so good at making distinct voices for each of the characters, even if they’re secondary (i.e. Sparky Donaldson, Uncle Monty, etc.). He gives Collin just the right “light” tone and not too effeminate. He does a great job with the emotion – especially with the bombing and all the highly dramatic stuff. Eric has a lovely deeper voice listening to him call Collin all those sweet pet names was delightful! Highly recommend this as the best way to enjoy this story!