Posted on February 9, 2017 by thebloggergirls 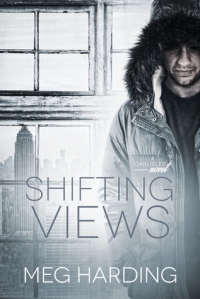 Blurb:  Successful fashion model Denver Carlisle is finally living on his own. He’s got a new apartment, a neighbor who has a problem shutting his blinds, and a local bakery with an owner who makes his knees weak. It’s raining men, and Denver hasn’t gotten any in a long time. Going out on a limb, he asks Ethan Monahan out and resorts to a little exhibitionism for his neighbor. Only to be turned down by both. That’s a first.

Ethan Monahan runs his own bakery and has a new neighbor who walks around naked. The latter is a little too distracting. When his naked neighbor turns out to be none other than model Denver Carlisle—and the customer who asked him out—Ethan tries to make amends. In a purely friendly way.

Friendship leads to more, and both men find themselves in over their heads with emotions and compromises. Denver has trust issues that could span the Sahara, and Ethan is a product of the foster system with a chip on his shoulder and a serious wariness of those with money. There’s only one way to reconcile their issues: work together.

Review: First things first … apologize to Garrett Leigh as the cover artist, but this cover definitely does represent the book at all! I saw the cover and I thought of a gritty edgy story… which I didn’t get. Oh well…

Denver is the last of the Carlisle siblings … the last single one. His twin brother just recently got involved with a hockey player. His other siblings are also happy with their partner or spouse. So Denver decides that it’s time he gets the taste of living independently – while also exploring the possible men in the new neighborhood. Like his neighbor who seems to like parading his naked back, or the cute bakery owner whose place is Denver’s new favorite café…

I loved Dorian’s book (he is Denver’s brother), so I was quite excited with this one. Unfortunately, I wasn’t as impressed. For the most part, I thought Denver and Ethan’s interactions were incredibly awkward!! I found myself cringing when I read their exchanged conversations … like the discomfiting situation poured throughout the pages.

I wonder if this was intentional though…

Denver is highly dependent on his siblings, so he is a bit out of his element when he tries to approach Ethan on his own. Especially because Ethan is not someone who is fascinated with Denver’s profile as a model. Heck, Ethan doesn’t even recognize Denver as someone famous! Meanwhile, Ethan is a product of a foster home; so he can be socially challenged, like Ethan’s bluntness or his rigid stance about the financial aspect of dating someone who is richer than himself.

So maybe this influenced the way both men approached the relationship. But it also resulted in an uncomfortable reading. It did get better after a while… after Denver and Ethan found the right rhythm. However, this was definitely not my favorite of the series *sad face*.