Follow Me Into Darkness: Exclusive Teaser from Masked by J.R. Gray & Giveaway!

Posted on February 27, 2017 by thebloggergirls

Five of the top voices in queer romance teamed up last year to give you Follow Me Into Darkness: Five Tales of Carnivale Romance. Their stories were bold, they were decadent, they were achingly sinful. They begged you to remove your masks just once and many of you listened. Their stories looked into the heart of modern day New Orleans and its steamy past, followed an errant queen in disguise, walked through the lush streets of Rio, and then continued straight on into the lofty pages of a Shakespearean soliloquy.

Mardi Gras is coming fast and Follow Me Into Darkness is back to seduce you. It’s on sale for only 99 cents from 2/26 – 3/5 plus the authors are giving you gifts and treats along the way!

For one week only, romance writers Santino Hassell, J.R. Gray, J.C. Lillis, Roan Parrish, and Kris Ripper dare you to take off your masks again…but are you ready for what might happen if you do?

Now, for a brief teaser from J.R. Gray’s story, Masked, from Follow Me Into Darkness:

“It’s a bad idea.” Javier slid the mask down his face, exposing dark brown eyes first. He had a crease in the center of his brow and a crook to his nose. It was the first time Heath’d gotten a good look at Javier’s face, and it was brutal, beat to shit, but he was beautiful, more so than he’d been over a decade ago.

Heath dropped his eyes to the floor and nodded. He was about to turn to leave when Javier grabbed a fist full of his hair. Surprise flashed through Heath a moment before Javier’s mouth met his… 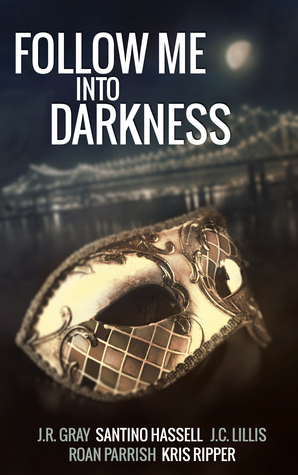 Carnivale is a time for decadence, for revelry, and for mischief. A time when we shed the figurative masks we wear in everyday life in favor of new ones… ones that allow us to be a little bolder, a little more adventurous, and perhaps a little truer to ourselves. Follow Me Into Darkness is a compilation of original tales of queer romance by five of the premier authors of contemporary romance.

Interesting things never happened to Zay. He was the wallflower everyone forgot about as soon as the booze began to flow, and Mardi Gras had never been an exception. But after a chance encounter with a devil-may-care grifter, this year’s celebration brings adventure and whirlwind romance.

If We Be Friends by J.C. Lillis

Seventeen-year-old Ven should be flying high—he’s playing the title role in a new TV drama about Hamlet’s teen years, and tonight they’re having a Mardi Gras cast party in a possibly-haunted castle. But Ven’s lost all his mirth since his boyfriend suggested they “take a break,” so he plans to skip the bash and brood in his trailer all night. Then the exasperating guy who plays Horatio challenges him to a Shakespearean soliloquy-off, and Ven knows his actorly honor is at stake. He says yes to the duel, trudges off to the the party to meet his fate–and finds that more awaits him onstage than a battle of wits and words.

Blistering heat and half-naked masked men as far as the eye can see, but Heath runs into the one face it’s taken him fifteen years to forget. Javier is plagued with a life of regret, but when a second chance confronts him, can he let go of his hang-ups and seize the moment?

The Queen’s Reflection by Kris Ripper

Isah plays the role everyone expects: malleable and cautious, a true queen. But what others see as a queen’s appropriate modesty is really just a disguise for what Isah has never told anyone, the thing no one can ever know.

This body, dressed in the queen’s gowns, is a lie.

Once a year, at carnival, Isah dons someone else’s clothes and becomes them for a night. A young cook in stained whites, or a stableboy in worn breeches. As long as no one gets too close the pretense holds.

Until two strangers look past all the characters and Isah finally exposes the person behind the mask.

Sometimes when he touches people Philippe Rondeau sees their future. It’s erratic and inconvenient, but mostly he’s learned to deal with it. Sure he hasn’t found true love yet, but he has friends and lovers, and is kept busy running his family’s jazz club in Prohibition-era New Orleans. But now it’s Mardi Gras and all bets are off. In the space of one night, Philippe falls under the spell of jazz musician Claude and learns a terrible secret about his powers. If Philippe is certain of anything it’s that the future can be tricky, but the chance at love makes it all seem worthwhile.

J.R. Gray: When not staying up all night writing, J.R. Gray can be found at the gym where it’s half assumed he is a permanent resident to fulfill his self-inflicted masochism. A dominant and a pilot, Gray finds it hard to be in the passenger seat of any car. He frequently interrupts real life, including normal sleep patterns and conversations, to jot down notes or plot bunnies. Commas are the bane of his existence even though it’s been fully acknowledged they are necessary, they continue to baffle and bewilder. If Gray wasn’t writing…well, that’s not possible. The buildup of untold stories would haunt Gray into an early grave, insanity or both. The idea of haunting has always appealed to him. J.R. Gray is genderqueer and prefers he/him pronouns.

Santino Hassell: Santino Hassell is a writer of queer romance heavily influenced by the gritty, urban landscape of New York City, his belief that human relationships are complex and flawed, and his own life experiences.

J.C. Lillis writes contemporary YA novels about fandom, friendship, love, and art. Her Mardi Gras story was inspired by crazy days and nights in her college theater, where part of her heart still beats under the  floorboards. She lives in Baltimore with her patient family and a cat who intends to eat her someday.

Roan Parrish is currently wandering between Philadelphia and New Orleans. When not writing, she can usually be found cutting her friends’ hair, meandering through whatever city she’s in while listening to torch songs and melodic death metal, or cooking overly elaborate meals. She loves bonfires, winter beaches, minor chord harmonies, and self-tattooing. One time she may or may not have baked a six-layer chocolate cake and then thrown it out the window in a fit of pique.

Kris Ripper lives in the great state of California and hails from the San Francisco Bay Area. Kris shares a converted garage with a toddler, can do two pull-ups in a row, and can write backwards. (No, really.) Kris is genderqueer and prefers the z-based pronouns because they’re freaking sweet. Ze has been writing fiction since ze learned how to write, and boring zir stuffed animals with stories long before that.

As part of this blog tour, the authors are giving away 3 (three) $5 Amazon Gift Cards and 2 (two) ecopies of any backlist books by one of the Follow Me Into Darkness Authors !! To enter, just click the link below!

One thought on “Follow Me Into Darkness: Exclusive Teaser from Masked by J.R. Gray & Giveaway!”