Book Review: The Wizard by the Sea by Anna Wineheart 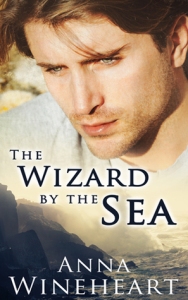 Blurb:  On his tenth birthday, Connor trips over a wizard on the shore. Amidst glowing clovers and roses drawn in the sand, the wizard shelters him from the rain and promises to teach him magic. Three years later, they meet again, and Connor becomes his student.

Yates has never been a mentor—he doesn’t deserve the privilege. But Connor comes to him after a tragedy, broken and helpless, and stays for years. Without realizing it, they fall in love. Yates knows he shouldn’t: he has shaped this boy into a man. At a loss, he pretends not to notice Connor’s affections… until his nineteenth birthday, when they celebrate a hard-won victory and give in to desire. Ashamed, Yates banishes his student, leaving a hole in both their hearts.

Four years later and still lonely, a tidal wave sweeps Connor back into Yates’ life. When they meet again, he discovers that Yates has withheld secrets from him, secrets that could change his life. Their past is fractured, their future uncertain. But the one thing Connor knows is that he’s always loved the wizard by the sea.

Review: I love being in the position to try new authors, genres, age groups, etcetera. It allows me to open my mind and explore things I might not normally even look at.

I love paranormal as a genre, but am not keen on YA/NA in general, nor am I normally attracted to fantasy stories. There are some exceptions. I’d never heard of this author and I was compelled by the age gap and the magic and I was also interested in expanding my horizons.

This is very unlike any book I’d ever read. In the first “chapter” it essentially outlines EXACTLY what’s going to happen then expands upon it. So – I knew what to expect, right?

First, it’s written in the present tense, which – for me – is really hard to get into. I don’t like how it feels and it somehow makes me feel more separate from the story than other tenses. I guess it just feels more artificial. I don’t know. But I’ve not read many books/stories in that tense that I liked.

Second, the story has an ambiguous time frame – contemporary? Recent past? I was never sure and I think it takes place in the UK but again – it could be somewhere in the NE of the US, too.

Each chapter is one of Connor’s birthdays and I definitely liked that approach. It felt really linear and helped to make some sense of the … oddness. When Connor meets Yates he’s 10 and he thinks he’s being eaten by a Kraken but Yates “saves” Connor. Then Yates shows Connor that magic is real and that Connor has magic in him. Of course, Connor wants to know more but Yates tells him now isn’t the time and that they’ll be seeing more of each other, later.

I was pretty confused by it all but some of it made sense as I kept reading.

Unfortunately, the overall weirdness stayed with me and I never did like these guys as a couple. I just didn’t bond with them and though I finally understood what all was happening, by the time it made sense I was no longer invested.

I didn’t feel the sexual chemistry between these guys and when their relationship morphed it was a bit jarring. (Yates is over 200 years old and I never did find out how he stays looking young or what will happen to Connor as he ages – so it’s kind of a May/December thing – but more so because Yates knew Connor and began tutoring him when he was still really a boy.) While it wasn’t skeevy, it didn’t feel romantic or sexy either.

Connor’s story – when he’s not with Yates – is actually pretty touching. I really liked the way his relationship with his dad changed over the years and I loved that his dad was so non-judgmental. I don’t know if that was unique to him or if this is a different “world” where same sex partnerships are just more routine.

The dialog is unique as is the premise, and I think if you’re a big fantasy fan (vs. paranormal), this might appeal to you more than it did to me.

All in all, this just wasn’t a good fit for me but I always recommend looking at other reviews of the same book because a lot of this is chemistry and personal preference and not a reflection on the book or the author.

I’m going to give it a 2.75 – rounded to 3 of 5 stars because it was unique and had some interesting world building.