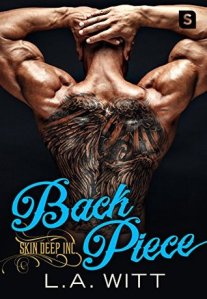 Blurb:  Colin Spencer is a tattoo artist with a past he’d prefer to keep a secret. Actually, he has a few secrets that he’d rather people didn’t know about, which is why Colin doesn’t do commitment. But when a shy sailor approaches him at the gym, Colin finds this guy pushing all his buttons.

Growing up in a conservative family, then escaping with the Navy, Daniel Moore is an unsure virgin who feels like he can’t share his true self with anyone. Seeing Colin—and his tattoos—at the gym are the sign Daniel needs to finally get those tattoos he’s always wanted, and maybe try his hand at flirting.

As Colin and Daniel spend more time together, their awkward hesitations turn into a deep passion neither expected. But with both men harboring secrets, will their relationship be able to survive their insecurities and become something beautiful?

Back Piece is a sexy, emotional journey of two people learning to love and finding acceptance for who they really are.

Review: What an enjoyable story this was! Two guys who had small secrets but didn’t wait forever to disclose them thereby removing the often seen too much inner struggle about said secrets.

Daniel is a total sweetheart. Brought up by very religious, homophobic parents in small-town Iowa, he counted down the days until he was able to escape by joining the Navy. However, due to his circumstances, he was unable to have any actual sexual experiences, and the older he got, the harder it became for him to do so, given his inexperience. But he is a determined young man, and when he meets Colin, they have obvious chemistry. They tiptoe around each other for a short time though before finally making a move. Daniel wants his first tattoo, so that is the start of their relationship.

I loved the support systems both of these guys had. Daniel has some great friends in his squad, and I’m hoping one of them will get more page time in the follow up books in this series. I was disappointed there wasn’t an epilogue with this story, as the issue of coming out to Daniel’s family felt like it needed a bit more closure one way or the other, but, all in all, this was quite the enjoyable story. I’m really looking forward to seeing where the story takes us in the next installment!