Book Review: Take a Chance on It by K.A. Mitchell 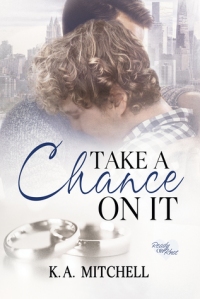 Blurb: Left at the altar by his long-time lover, Spencer, and in desperate need of quality health insurance, Dane Archer can’t say no when his best man and best friend, Gideon DeLuca, steps in. But Dane and Gideon have history, tangled and passionate and complicated.

After seventeen years of cat and mouse, Gideon has realized Dane isn’t the kind of man who ever wants to be caught, and he’s stopped playing Dane’s game.

For Dane, it’s never been a game, but sexual fidelity isn’t his strong suit. Love is too beautiful for limits, something he’s never been able to get Gideon the control freak to understand. Now Dane has nothing but limits, including the timeline on his paper-only marriage to Gideon.

Gideon’s the only person Dane trusts enough to lean on, and Gideon will do anything to get Dane through this crisis. Anything but fall for Dane again.

Living together forces Dane and Gideon to stop circling and face what’s been between them all these years. They just don’t know if they have the power or the time to make things right.

What they do know is that they’re not ready for it to be over.

Review: What a great rebound book and close out to the series. My thoughts on this series were all over the place, from five starring book one, to a 3 star on book two, and back to a five star in this one. Dane and Gideon have been on my radar from book one and a part of me wanted to hate on Dane for playing Gideon the way he did. But, there is more to Dane than what we expected. Of course, there is.

Dane is now the one left at the altar and Gideon, though he’s been in love with his best for forever, hurts for the pain that his competitor, Spencer, has caused Dane. Spencer was marrying Dane because Dane is critically ill and needed the health insurance, but though they were not the romantic and marrying kind, he still thought Spencer loved him. Until the worst case scenario happens.

Gideon has resigned himself to being a fuck buddy to the man he has loved above all others, even though that man is in a relationship with another. Dane doesn’t see himself as the committed kind and so his relationship with Spencer was mutually open. They screwed around but came back home to each other. Gideon wanted more, Dane knows he wants more, but Dane is always open and honest that he doesn’t have more to give and so he resigns himself to occasional sex with his best friend.

You ache for Gideon and wonder how he allows himself to always be second in Dane’s world. Honestly, Dane is in love with Gideon but just doesn’t realize it for what it is. He is truly a clueless man, and one who was lucky enough to get a second chance with Gideon.

The health scare is integral to taking their relationship to the next level, and that intimacy is how they finally end up on the same page.

I ended up loving them both and cheering for the 17 years worth of shenanigans to be over.

Honestly, this was a great story and the only complaint I have is that I waited so long to read it.