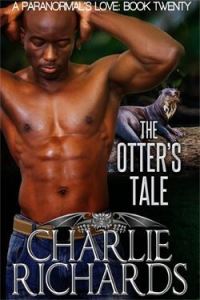 Blurb:  Into the Paranormal World: Getting lost in the woods, an otter shifter discovers a treasure beyond value.

While helping out some of his buddies, Aziel Boltson learns the creatures that go bump in the night are real. His mother’s stories are true–gargoyles, shifters, and more actually exist. The local paranormals–a gargoyle clutch–have an estate north of town. Aziel loves using the natural wildlife as an outdoor gym, lifting tree branches and swimming in the pond. Spotting the pond’s local gator going after a huge otter, Aziel moves to intervene. He ends up injured, but it’s not all bad. The otter turns into the sexiest man Aziel has ever seen–Jerome Laguna. While he’s never been with a guy, he can’t help but want this one. To Aziel’s pleasure, Jerome claims he is his mate. Unfortunately, a prophesy of Aziel’s mother’s rears its ugly head in the form of Jerome’s family attempting to hunt him down and take him back to the Amazon. Can Aziel and his friends help Jerome escape his otter family’s clutches or will the prophesy be fulfilled, forcing Aziel to lose his one true love and his future in one fell swoop?

Review: I LOVE otters! I was SO psyched to see Charlie had written a shifting otter! (There really should be more of these – they’re so cute and mischievous!) I was also psyched to revisit A Paranormal’s Love Series because I also love Charlie’s gargoyles and that world.

I gotta tell ya, I was disappointed.

I doubt I’ll ever give up on this author – I’m just too addicted – but I haven’t really been too terribly impressed with the last few books, and this one sort of confused me as well as disappointed me.

We start out with a lot of potential – an Otter on the run – intent on finding water after a trek through the desert. When he finds water, he also finds a shifting alligator and a group of gargoyles! Jerome, the otter, is worried about being in another paranormal’s territory, worried about his own family hunting him down and that’s not all – he’s found his mate! His mate, Aziel, is not only human, he’s never been with a man and now he’s injured!

Frankly, there are just too many things going on for such a short story.

Jerome’s family drama is simple but very little gets explained beyond surface details, so I never felt “involved” or concerned – it just passed by in a blur.

Aziel is a character we met briefly before, a straight football player who already knows about paranormals. So we have a GFY story and “first time with a man” story, a “human mated to a paranormal story” but all that gets smooshed into a few paragraphs of internal dialog about being with a man, one or two intimate scenes, and almost no discussion about what it means for these guys as a couple

Forget about any sort of emotional relationship between Jerome and Aziel. One or the other of them is either getting hurt, recovering, or the two of them are “bonding”. I have very little idea what makes either of them tick, what they’ll do now that they’ve bonded, or how Aziel is coping with his new shift in sexuality.

I totally understand and approve of instalove, instalust and the idea of short stories moving things along quickly. But, I need at least one thread of the story to really pull me in and keep me focused and this just felt like the story thrashed all over the place without an anchor.

My final issue: the ending. There’s some foreboding that makes it seem like something different is going to happen between Aziel and Jerome near then end – some goosebumps – a focus on a different aspect of their bonding – that makes me think something special is coming, and I was very disappointed with how things end up. I won’t say what it was or wasn’t but it didn’t make a lot of sense to me.

In any case, I still consider myself a Charlie Richards super fan and will continue to read eagerly anything she writes, and I’m hoping her next book will sit better with me.