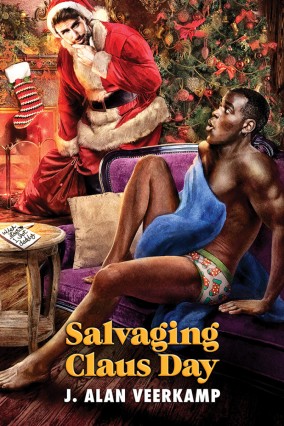 Everything changes with the appearance of Luz Espina’s lifepod. Filo shares many interests with the flirtatious Luz, though Filo’s isolation has strained his communication skills. Still, Luz pushes all his buttons… and reminds him of the last man he was attracted to—an attraction that ended in disaster because the man was straight. When Luz learns Filo has never celebrated a holiday, he vows to cobble together a Claus Day celebration for them to share. But is it merely a friendly gesture… or something more?

This was a very surprising story. I never really know what the advent stories are about because I just gobble them up but this one was a bit intense at first. It’s about Filo who’s been completely alone in space for the past three years. For the past three months, though, he’s been living with Luz, a man who’s life pod was floating by Filo’s station. Filo isn’t sure how he feels about having Luz around especially when Luz seems to be naked most of the time but Filo sorta likes the company. When Luz finds out Filo’s never celebrated Claus Day, he makes it his mission to give Filo one of the best days ever.

Now when I say intense, it’s because of the underlying feel to the story. Once you read it, I think you’ll understand but I absolutely loved Filo as a character. I liked that he was okay with being alone and I liked that he was a bit shy and quiet. Even with Luz around he didn’t seem to talk much. As for Luz, he’s very flirty and taunts Filo with all his bare flesh. I liked that he made so much effort to give Filo a great Claus Day. It was so sweet of him! I really enjoyed them together.

However, while I really liked this story, there’s one glaring problem I had. Was this all a hallucination? I mean, the pills Filo was taking were supposed to stop delusions and hallucinations due to being alone and in space so long but he stopped taking them, suspiciously, right before Luz showed up. So was it all fake? We never got that answer and, in the end, I felt like it was an answer Filo did not want to know so it left me confused and like it was all for nothing?

Overall, I enjoyed the story. I hated that we don’t actually get an answer to if it’s real or not but I liked Luz and Filo together. I liked their chemistry but I also loved that they were so sweet together. Definitely give this one a go if you’re looking for something short, sweet with just a hint of internal angst to it.