Posted on January 31, 2018 by thebloggergirls

by Jocelynn Drake and Rinda Elliott

Quinn waited while Shane walked Baden out, then headed toward the break room. He dug out one of the bagels and frowned to find it cold. There wasn’t a toaster on the counters, so he settled for the microwave even though it would make it chewier than he liked. As he stood there, staring at the buzzing appliance, he couldn’t stop his mind from supplying images of Shane and Baden naked.

“Fuck,” he muttered as he grabbed on to the edge of the counter and worked to push back the heat pouring into him. Lean, muscled Shane writhing on a bed with that tattooed slab of muscle. He’d have loved to have seen that. He wondered what Shane was like in bed. He laughed often, so would he be the type to crack jokes, or would he be a serious lover? Would he be attentive and take his time? Or would he be fast like everyone Quinn had been with before?

All of Quinn’s experiences with sex so far had been with either inexperienced teens when he was a teen himself, or later, some pretty unfucking-forgettable bad lays. And he hadn’t had all that many experiences either. Sex was something he enjoyed more by himself. The last time he’d tried with another guy hadn’t been anything to write home about, so he just figured it wasn’t worth the effort. That had been over a year ago.

Didn’t mean his body didn’t still react to the right stimulation and Shane seemed to trip all his triggers. When Shane cleared his throat, Quinn jumped, hoping the hot guilt burning in his cheeks wouldn’t be as noticeable as it felt. He turned to find Shane leaning against the doorjamb, his crooked grin telling Quinn his wish was not to be. His cheeks probably looked like he’d popped his head into an oven.

“There’s a toaster in the cabinet under the microwave,” Shane said. “Ethan and I both prefer toasted bread for our sandwiches, so it was easier just to store one here.”

Quinn reached into the cabinet and pulled out the toaster. He plugged it in and arranged it on the counter. He fiddled with the cream cheese packets and picked up a plastic knife. “Thanks for the bagels,” he murmured. “I’ll have to get you lunch.”

“Sure, if you’d like. But it’s not necessary.” Shane came farther into the room and dug through the bag and pulled out an everything bagel. “Love these things despite the fact that I hate getting the poppy seeds stuck in my teeth.” He grinned. “You’ll tell me if I do, right? You won’t just sit there, silently laughing at me with black shit in my teeth?”

That surprised a laugh out of Quinn. “Nah, I’ll tell ya.” He stopped the microwave and toasted his bagel.

When it was done, he settled at the small table against a wall and took a big bite. He chewed and watched Shane get his own breakfast ready. When the man sat across from him, he couldn’t help but notice those brown eyes stayed steady on him as always. What the hell did the man see to make him stare so hard and so often? Quinn fought the urge to squirm under that all too probing look and keep his eyes on his food.

“So tell me about yourself. What do you do besides perform computer wizardry for Rowe?”

“Haven’t found anyone good enough or are you the type to play the field?”

Quinn looked up. “Like you? That was quite the practiced brush-off you gave Baden. Why didn’t you want to go out with him again?”

Shane shrugged. “I might. We just hooked up once, had some laughs.” He winked. “And a good time. Those tattoos cover everything, if you were curious.”

“I liked them. Can’t imagine having that many, though. He must be a pain junkie.”

“Or he likes the art. Whoever works on him is pretty talented. He’s got this stunning, detailed tiger face covering his entire back. Stares right up at you.”

Quinn choked on his bagel. 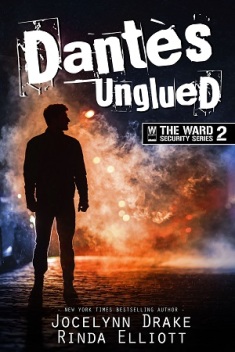 When private investigator, Shane Stephens, is hired by the mayor of Cincinnati to track down the hacker who has been threatening him, Shane is sure this is the opportunity to launch the Merleau Detection Agency into the big time. He even convinces Rowe Ward of Ward Security to loan him one of his best IT specialists, Quinn Lake.

Shane, a man who prefers casual intimacy, is surprised by his attraction to the moody computer geek, but when Quinn suggests they have fun for the month he’s on loan, Shane happily agrees. Both men are expecting nothing more than a good time.

But the investigation takes an unexpected turn and they quickly discover they are facing more than a hacker out to ruin the mayor’s re-election chances. And as they spend more time together, they realize their relationship may be a lot more than just a good time.

With only weeks until the election, Shane and Quinn race to gather the proof they need while dodging bullets and possibly…falling in love.

Who are Drake & Elliott?

As part of this blog tour, Jocelynn and Rinda are giving away a $25.00 Amazon Gift Card!! To enter, just click the link below!

Don’t forget to check out Susan65’s review of Dantes Unglued to see what she thought of it!