Posted on February 20, 2018 by thebloggergirls 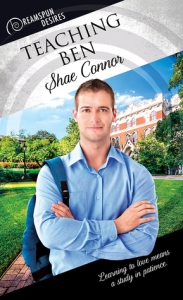 Blurb: Learning to love means a study in patience.

Fresh out of the military, Ben Cooper is ready for a new start. He’s away from his domineering father, making his own choices… and out of the closet. On his first day of college, he meets David Powell, who’s just the kind of gorgeous man Ben’s dreamed of. Too bad he’s the teaching assistant—which makes him off-limits in Ben’s eyes.

David is Ben’s age, but his life has taken a different path. He’s close with his family, who helped him deal with personal struggles after he came out. And while he’s staying away from any hint of scandal, Ben’s a kind of temptation he hasn’t faced in years. If only they’d met on more equal footing.

As the semester progresses and their lives become more entwined, keeping their relationship platonic becomes more difficult. They just have to hold out until the end of the semester….

Ben Cooper is out of the military after six years of service, also out of the clutch of his domineering father. Now, Ben’s pursuing his education at Savannah University. But on the first day of his Introduction to Mass Communications class, he held eyes with David Powell, the teaching assistant. Starting any romantic relationship with David is a bad, BAD idea right? Well, nobody says that they cannot be friends first…

What I liked about this is that despite their mutual attraction, neither David nor Ben are willing to ‘risk’ their TA/student position. While there’s no explicit rules about TA and student relationship, they decide that they want to wait until the semester is over when David is no longer Ben’s TA. So, Ben and David indeed build a friendship first.

And I enjoyed that. We have a LOT of cute friendship moments between Ben, David, David’s sister, Hope, as well as a couple of other students. There’s home cooking, cooking lesson, watching movies, and such. They even once banded together to catch a THIEF … yes, a thief, uhm, you have to read it to understand the context *haha*.

There’s also a little surprising information about David’s background that adds something to his character.

All in all, this is a nice contemporary romance coming from Dreamspun Desires imprint …