Posted on February 26, 2018 by thebloggergirls 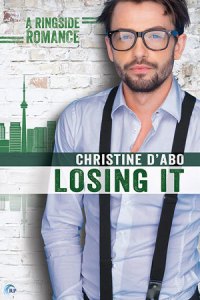 Blurb:  Finn Miller doesn’t do social. He works his IT job from home as often as he can to avoid people. If it weren’t for his weekly training sessions at Ringside Gym, he might never leave his apartment. And he only does that because of Leo, the gym member he’s in love with. When Finn gets talked into attending a speed dating fundraiser at the gym, his greatest wish is to have the courage to try to say something—anything—to Leo.

Justin McCormick has spent most of his adult life being used, whether playing a corporate heavy, or acting as guard dog for his ward. So when he leaves Vancouver for a fresh start in Toronto, he doesn’t quite know what to do with himself.

The moment Justin sees Finn at a speed dating event, he knows there’s no way he’ll make it without a little help, so he offers to coach Finn on the art of conversation. What he doesn’t count on is his unexpected attraction to this shy boxer, or his fear that if Finn gets his way, Justin might lose out on his best chance at love.

This was another solid installment of this series centering around the gang now involved in some shape or form with the gym. We met Justin in the second book, Faking It, where he was the guy giving Grady trouble working for Grady’s father as his right hand man. He played an important role in Grady’s life, but after things that happened in that book, he now finds himself out of a job. He shows up at Grady’s door looking to make amends and ask for some help.

Finn is a young man who has some anxiety issues and has been going to the gym to build his confidence. It hasn’t helped him this far in getting a date with his crush, another gym attendee, and things are not looking too positive in that respect. That is, until he meets Justin, whom he has no trouble speaking with. Justin offers to help Finn with his confidence with his crush, and their friendship begins to grow from there.

This was a great friends to lovers story, and I found watching their friendship and trust grow to be the best part of this. We were able to see all sides from the various points of views which was helpful. While this wasn’t super steamy, the relationship blossomed in a natural progression. It was also nice to see other relationships mended in the process. This wasn’t my favorite of the series, but I still really enjoyed it and can’t wait to see what’s in store for this crew next.