Posted on March 8, 2018 by thebloggergirls

Exclusive Excerpt from Fox and Birch

There were three strangers in the front room, and when they approached, even Fletcher’s less sensitive nose picked up the familiar tang of silver in the air. No wonder it had put Wade on edge; he’d almost died of exposure to the stuff less than a month earlier. The fact that he’d willingly walked into a room where he could smell it made Fletcher feel inadequate.

The three men stood spaced far apart, in stances that screamed of false calm. One of them had his jacket open, showing off a shoulder holster. No doubt he’d have the proper concealed carry permit if asked for it.

“Everything okay, Jen?” Wade asked the officer on desk duty. She was the newest member of the local force, so she tended to get the duty no one else wanted. She was also the one who usually complained that they needed a new coffee maker, since she had to deal with it most often. Fletcher was more than willing to back her on it, but the sheriff tended to be a little slow to accept changes, even unimportant ones.

She turned and looked at Wade, a pinched frown on her lips. “These guys are bounty hunters,” she told him, in a tone that said she thought they were at least as bad as whatever criminals they might be hunting.

Wade quirked an eyebrow and looked over at the guys—who Fletcher didn’t believe for a second were bounty hunters. Hell, they had one guy standing lookout in the doorway, his back to them so that he could see anyone coming in. Wade was calm, though. The corner of his mouth turned up, and he looked every inch the arrogant small-town cop that he often played. He was scarily good at it and even fooled locals sometimes.

“And what would ‘bounty hunters’ be doing in our tiny town? Has there been a prison break I don’t know about?” Wade’s tone said he thought the men were idiots for even making the drive to Rowan Harbor, and Fletcher had seen people break under that stare. He had a feeling these guys weren’t going to be that easy.

The man who had been leaning across the front counter—the one whose gun was on display—looked Wade over and rolled his eyes. “This is just the kind of place people go to hide, kid. Middle of nowhere, no media attention, tiny police force who aren’t expecting trouble.”

Wade’s smile went wolfish. “Only trouble I’ve seen in this town in a while is standing right in front of me. You looking for someone in particular, or just thought you’d show up, hang out, and wait for something to happen?”

That seemed to get under the guy’s skin a little. “We’re looking for a dangerous criminal. A murderer. We only came here as a courtesy to the local police, and I suggest you steer clear of our work. Wouldn’t want you to have to deal with real trouble.”

The guy with his back to them snorted loudly, and something in Fletcher’s stomach curled in sick anticipation. He stared at the back of the man’s head.

Wade, meanwhile, was on a roll. “Any particular reason you think a murderer is hanging out in Rowan Harbor?”

“There was a report of two people being attacked last month, and no arrest made,” the man said, his tone smug.

“So you think a murderer turned up in the Harbor, tried to kill someone, and then what, stopped feeling murderous? We didn’t find the culprit because he left town. They found his abandoned car on the road halfway between here and Portland. You think he dropped it off and walked back?”

The truth was that they had driven it there and abandoned it after scrubbing it for any kind of evidence. They hadn’t wanted it tracked back to Rowan Harbor, dammit.

“But he was a blond guy? Short? Pale?” the other man, who had previously been silent, asked. He was younger than the man at the counter and looked concerned and earnest.

“Yeah,” Wade agreed. “Came into the bar one evening, said his name was Sol White. We think he attacked one person that night, but no one saw anything, including the victim. Then a few days later, he attacked a guy on the pier. We impounded the car, but someone broke the lock on our lot and stole it. Car turned up a few days later, and nothing exciting has happened since. Your murderer has moved on, gentlemen.” Wade leaned an arm on the counter, standing between Fletcher and the men, and halfway between them and Jen, and smiled. “Then there’s the fact that I ran the name through our database, and we didn’t turn up any hits for crimes committed by a man fitting the name and description.”

“He’s got a couple of aliases,” concerned guy said. It was strange, but if he hadn’t known what they were, Fletcher would have thought the guy was serious.

Fletcher had seen their kind before. The tactics, the attitude, and the smell marked them as clearly as if they’d worn signs. They liked to call themselves “hunters” or some such crap, but Fletcher knew a killer when he met one. These men hunted and murdered supernatural creatures. Looking back at the man in the door, he knew without doubt that these men were killers. That smell of barely contained body odor, bad breath, silver, and cigarette smoke was so familiar that it almost brought tears to his eyes.

The guy turned to look at him and flashed a smile. Recognition hit Fletcher head-on. For a second, he felt the panic of a fourteen-year-old child, the child he’d been when he’d first seen that smile, but there was no recognition there. The guy wasn’t taunting him; he was just being an asshole.

He didn’t know that he had murdered Fletcher’s mother.

About Fox and Birch 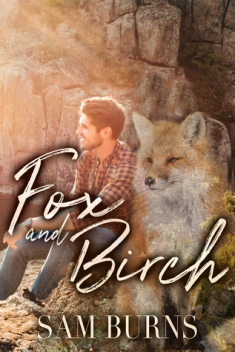 Fletcher Lane wants to protect people. It was why he became a deputy. A month ago, it was why he killed a vampire who kidnapped one of his friends. Now, that death has started a cascade effect that’s tearing his life apart, leaving him possessed by magic that whispers to him in ancient Gothic.

While he’s already fighting for control of his own mind, he has to hold it together when strangers come into town looking for the dead vampire. They say they’re bounty hunters, but Fletcher knows that’s a lie. They’re the same kind of murderers who killed Fletcher’s mother. When one of them puts up a kind front, Fletcher knows that people who hunt the supernatural can’t be trusted. However nice Conner Mason seems, the worst thing Fletcher could do is fall for his act.

This is the third of nine books in The Rowan Harbor Cycle, not a standalone. It continues where the second book left off. Fletcher and Conner will return in book six to continue their story, so this book contains a HFN, not their HEA.

Sam wrote her first fantasy epic with her best friend when she was ten. Like almost any epic fiction written by a ten year old, it was awful. She likes to think she’s improved since then, if only because she has better handwriting now.

If she’s not writing, she’s almost certainly either reading or lost down a wikipedia rabbit hole while pretending to research for a novel.

As part of this blog tour, Sam is giving away an eBook copy of Blackbird in the Reeds!! To enter, just click the link below!