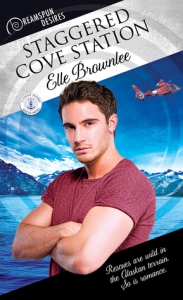 Blurb:  Rescues are wild in the Alaskan terrain. So is romance.

Sun-kissed California guardsman Dan Farnsworth might be at home in the water, but he’s out of his element at remote, rugged, and freezing Staggered Cove Station. Acclimating proves hard enough, but he’s also digging into how the station’s previous rescue swimmer was lost at sea. Was it an operation gone bad or something more sinister? Add to that the instant tension between him and his partner—no-nonsense Alaska-born Karl Radin—and Dan has his hands full.

As his investigation heats up, so does the attraction between Dan and Karl, even if they don’t completely trust each other. But as suspicious events escalate to sabotage, Dan starts to fear that he and Karl won’t get the chance to become more than reluctant coworkers.

First thing that I need to state … ALASKA!! Yes, when I read that this book was going to set in Alaska, I immediately jumped on the chance to ask for the advanced copy. Why? Again, Alaska! *laugh*. I love it when a setting of the romance book is set somewhere less familiar to me (although, being an Indonesian, every English romance I read is set somewhere not familiar, but you know what I mean).

Californian guardsman Dan Farnsworth comes to Staggered Cove Station, Alaska, with a personal agenda. Dan needs to know the truth behind a missing rescuer since he knows the man personally. Dan doesn’t count on being attracted to Senior Guardsman, Alaskan-born Karl Radin, though, especially since initially, Dan thinks Karl hides something about the failed mission.

I really liked that the story has a flair of mystery in it. It sure made the story more interesting. Although, all the actions regarding a rescue mission are also exciting to read. I could imagine the scenes in my head – it sure would make a nice movie shot 🙂

The romance between Dan and Karl was nice, but personally, I felt it was slightly lacking ‘knowing each other’ moments. Maybe because Dan was hiding something from Karl. That was the only reason why I didn’t enjoy this more.