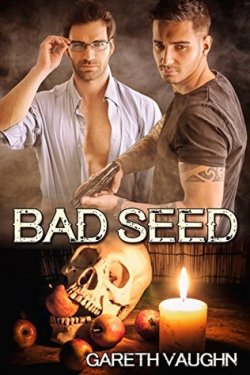 Blurb: Dane’s a Decrypter down on his luck — after accidentally dispatching the wrong creature, he’s sent to a small town where the cryptids he hunts are sparse. Crypt Coffee becomes his business front, but instead of a thrilling new mission on the side, he’s stuck sending ghosts back to where they came from. Dane can annoy customers, at least, and tries to scare off Professor Sean Sanderson when he starts poking around too much.

But Sean isn’t about to stay away. Not when he hears about the murder of a former student, and definitely not if young, exciting Dane has information about it. But the more he allows himself to get dragged into this supernatural world of monsters and ghosts, the more the danger escalates. And if Sean and Dane aren’t careful, tracking down a murderer who can use magic might just get them killed.

This was an enjoyable paranormal with some unique elements (early in the book, a vengeful ghost inhabits a cluster of pine trees, which then attempt to squeeze one of heroes to death with their branches). I also liked Ned, the disdainful ghostly sidekick, a trans man from the 1800s who is finally able to live his true identity in death.

This was definitely a case of plot over characterization, which is not a great fit for me. I was also very bothered by Dane’s problematic drinking, which is entirely unacknowledged in the narrative, including at least one episode of drinking and driving.