Book Review: In the Desert by Elliot Joyce

Posted on May 4, 2018 by thebloggergirls 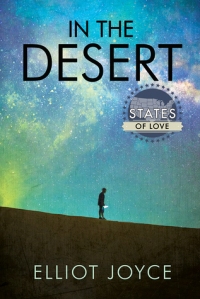 Blurb: Can a Navajo trans teen and a nerdy Catholic find the place they belong… and maybe themselves? In the desert, anything is possible….

When Wren came out as transgender before his senior year, it cost him most of his friends. His father hopes joining a Boy Scout troop might help Wren meet other young men his age and be accepted for who he is.

Felipe Nieves wants the new guy in the troop to feel comfortable, and he reaches out to Wren. They become fast friends… with something more beneath the surface. Those feelings confuse Felipe, since his religion considers this a sin—and he’s always assumed he was straight—but he can’t help pining for Wren. Asking him out will take courage, and getting together won’t be easy… but through their friendship, both young men might find their identities… and learn to embrace them in a unique coming-of-age story set against the beauty of the American Southwest.

Review: Honestly, it only took three words from the blurb written on the newsletter from the publisher for me to jump at the chance to review this novella in advance … “Navajo trans teen”. I knew that I would love this because I promised myself that I would read more diversity in the world of romance.

Wren comes out as transgender before his senior year. He must change schools though because of how bad the bullying was. Since Wren loses his friends and struggles with depression, Wren’s father thinks that joining the Boy Scout with his younger brother will help. Initially, Wren doesn’t think it will do him much good, but he indeed starts to make friends, including with another trans teen who is already part of the Boy Scouts. Then of course, there’s Felipe, a gorgeous Mexican-American teen, who makes Wren’s heart jump a little faster.

Oh, what a BEAUTIFUL story this is. One thing that stands out for me is all the positivity and acceptance in this novella. It shows evidence of unconditional love from family members, as well as an open-minded younger generation, that doesn’t really blink their eyes when they learn about their friend crushing on another boy. It gives me HOPE for the future, of a community that is more welcoming.

“No matter how our opinion changed, no matter what happened in the world or how you were born, we would do our utmost for you to be happy… I know that you’re frustrated with how slowly you feel things are going, and I can’t promise that it’ll change anytime soon, but… please know that we love you… ”

The friendship between Wren and Felipe flows naturally even if they are a little afraid of acknowledging their feelings. Wren because of his sexual identity and thinking Felipe is straight. Felipe because he comes from a Catholic family, and he isn’t sure how his abuela will react to his feelings for another boy. And how I LOVED their friends, who basically say that it’s all right for them to be together.

We are treated with Wren starting to come out of his shell a little bit, being part of the Boy Scouts, then both young men worrying over their crush – “no, he doesn’t like me like that!” – and of course the adorable part of asking the other one out for the first time. It’s so sweet and put a HUGE smile on my face.

Of course, there are things I wish were explored further – due to the length limitation, some scenes were done off page, like times when Wren visits Felipe in their house (it only says that Wren has been there for several times, but we don’t get those scenes) or other times they reconnect. However, that’s not a hard complaint *smile*.

With scenes that made me all teary eyed – like when Wren’s Dad reassures him of his and his mother’s love, or Felipe’s abuela that also accepts Felipe for who he is – this coming-0f-age novella is indeed a very precious gem.