Posted on June 5, 2018 by thebloggergirls 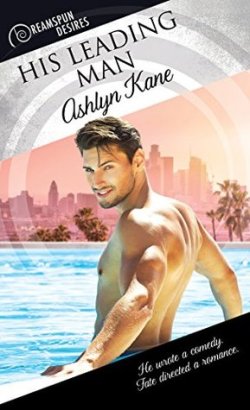 Blurb: He wrote a comedy. Fate directed a romance.

Drew Beaumont is bored of the same old roles: action hero, supervillain, romantic lead. He’s not going to let a fresh gay buddy comedy languish just because they can’t find him the right costar. No, Drew bats his eyelashes and convinces everyone that the movie’s writer should play Drew’s not-so-straight man.

Aspiring writer Steve Sopol has never had a screenplay optioned. Now one of Hollywood’s hottest properties wants to be in a movie Steve hasn’t finished writing—and he wants Steve as his costar. Turns out the chemistry between them is undeniable—on and offscreen.

Drew swore off dating in the biz, but Steve is the whole package: sharp, funny, humble, and cute. For Steve, though, giving in to the movie magic means the end of the privacy he cherishes. Will the credits roll before their ride into the sunset?

I don’t usually choose romance that involves famous people – yes, deliberately – mainly because it often involves secrets, misdirection, breech of privacy, and a lot of stress because the involvement of media. BUT, I like few of Ashlyn Kane’s previous books; also this one coming from Dreamspun Desires line, I can expect low steam story that focuses on the wooing or relationship build rather than sexual satisfaction.

I guess I made the right choice this time! For romance in the Hollywood blitz, His Leading Man is pretty sweet and angst-free. It helps that both men are VERY likable.

While Drew is sometimes said of being a diva, but it never felt like so to me. I thought he was rather cute, because he hasn’t really had a good relationship before – it crashed and burned! – and he wanted to give this newfound feeling for Steve a try.

Meanwhile, Steve, though not exactly a stranger to Hollywood fame, admits that he’s more of an introvert. Dating someone famous is not exactly in his agenda. He also prefers to take things slow with Drew.

So yes, people, there are DATES, and slow dancing, and kisses on the cheek (awwww!!). All in between they are making their movie. And when the media has catch scent of their relationship, there is no big drama! Both Drew and Steve are quite level headed in dealing with the consequences, which a PLUS point from me.

Bottom line, I enjoyed this book… oh, and there’s an adorable DOG too … alongside some quirky movie scripts on page that makes me wish that the movie, Dog Gone, is made into reality so I can watch it on screen.

One thought on “Book Review: His Leading Man by Ashlyn Kane”