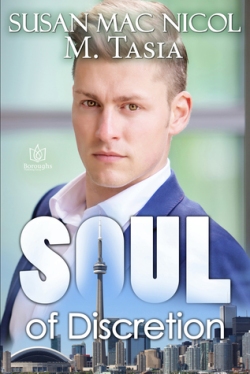 Blurb: Simon Bridgeworth, Earl of Stoneham, loves to play, and to perfect the game he delights in most, he’s funded a hook-up app, crUIzer, where he meets Nick Cooper, who turns out to be so much more than a one-night stand.

CAN YOU KEEP A SECRET

Simon Bridgeworth believes in loyalty, and keeping things in-house. When he discovers his best friend, who has been running the Canadian division of Simon’s tech empire, has been skimming millions from the company, Simon flies to Toronto to get to the bottom of the theft and learns his friend has been murdered. Devastated and at a loose end, Simon knows there’s no way the company’s problems can be kept under wraps now. Imagine his surprise when he learns the Mountie investigating the murder is the first repeat Simon has allowed himself in years.

Sergeant Nick Cooper is a proud member of the Royal Canadian Mounted Police. He’s served his country in the military, and now he’s protecting the citizenry of Toronto. But devotion to duty is no longer enough. On a whim, Nick hooks up with Aristocrat69 on crUIzer, and what started as one night of incredible sex turns into an attraction neither man can ignore. When a grisly mob murder sends Nick to the Breakforce corporation, he is shocked to discover his lover is none other than its CEO. When Simon’s life is threatened, ethical lines blur as Nick does anything to keep him safe – no cost is too high for the man who has become Nick’s everything.

Well, this was different, in a very good way. I love the Royal Canadian Mounted Police (RCMP) and so I jumped on this one as soon as I’d seen that Nick was a mountie. Add in a British aristocrat and I was puddy in your hands before I’d even opened the first page. This story has a bit more than just a budding romance. It is violent, there is mystery and intrigue, and there is the class difference between our protagonists.
Nick is a mountie for the RCMP. He’s a larger guy with submissive tendencies. Simon is a wealthy businessman and an Earl. He is also very bossy, very confident, and loves to top Nick in the most delicious way. These two have an attraction that just won’t quit. And though Simon was a bit of a jerk, at first, even he realized that there was something special about Nick that he was not willing to lose. But first, our guys have a murder to solve.
Simon is in Canada because his friend, and the leader of one his offices, is missing, and then found dead. In the most gruesome of ways. Nick just so happens to be the mountie assigned to the case. This story is so well written and nothing is glossed over. Their relationship is building as the case is being solved. But, what happens when the case is solved and Simon heads back to England. That is what Nick, and the reader, are left to figure out. In a way, I was a little bummed with Simon with the way it was handled, but the ending put it all to rights and I left in my happy place knowing that they were each where they needed to be.