Exclusive Excerpt from The Merchant’s Love

MAXEN STEPPED FORWARD to greet Tristan and the man Tristan would shortly marry, Lord Etan, cousin to the crown prince. He’d teased Tristan once about his “royal connections”—as their mother called them—but he couldn’t say at the time he’d expected his older brother to marry into the royal family. Tristan had been friends with Amory, Prince Philip’s husband, since they were children, which had brought him into the highest circles of the court, somewhere the wealthy merchants of Jumelle rarely reached, and into Etan’s path.

Tristan’s road hadn’t been an easy one, and it had taken him and Etan a long while to find happiness together. Maxen was nothing but thrilled that they finally had, even if he did find it all a bit surreal: Tristan, living in the palace, about to marry a royal cousin. And Maxen living in the house that had once belonged to Tristan and his late wife, playing host to Tristan and his soon-to-be husband. Maxen hadn’t expected to leave the family house until he married, if then, but doing so had been the right decision.

“Tristan, Etan, good evening.” He took Etan’s hand and then let Tristan pull him into a brief hug. They’d worked together that morning at the offices of their family’s shipping company, but Tristan acted as if they hadn’t seen each other in days. Maxen was glad to see the return of Tristan’s natural exuberance, though. It had been dulled for far too long. “Come in. Sit down. Dinner will be ready shortly, but would you like a drink first?”

Maxen led them into the front parlor, which he’d redecorated from when Tristan lived there. The first time Tristan saw it, he’d relaxed just slightly. Perhaps it had been better for him not to see memories every time he came in. The room looked completely different, and Maxen preferred it now that it was to his own taste—a little less formal, a lot more comfortable, warm, and cozy.

“A drink would be nice,” Etan said as he took a seat on the couch, Tristan sitting right beside him. Tristan had been hovering much closer to Etan the last few times Maxen had seen them, which was odd, since Tristan wasn’t particularly clingy. “How are you, Maxen?”

“Good.” Maxen swallowed back the honorific that wanted to spill from his lips—that he’d been told he didn’t have to use with Etan—and went to the liquor cabinet to pour them each a drink. “Tristan has been keeping me busy.”

“You asked for a bigger role in the company,” Tristan said.

“I did. I’m not complaining.” The shipping business interested him. But perhaps more importantly, with his help—and with the oldest of their younger brothers getting some experience too while he finishing his schooling—Tristan didn’t have to shoulder everything on his own. “How is my niece? You could have brought her, you know.”

“Bria is wonderful, bigger every day.” Tristan’s face slid into the smile that was reserved for his baby daughter. “And I know we could have, but we’d have had to leave early to put her to bed.”

“You’ll have to visit with her soon, then. I can’t have my favorite niece getting bigger every day and me not witnessing it.” She was his only niece so far, but that didn’t matter one bit. She might always be his favorite. Maxen handed glasses to Tristan and Etan and went back for his own.

“You could come up to the palace to see her,” Tristan said.

“Yes. You’re always welcome,” Etan agreed. It was completely obvious he was sincere as well, but Maxen just wasn’t sure he’d ever feel comfortable showing up at the gates to the royal palace and expecting to be admitted.

Tristan gave him a narrow-eyed stare, but Maxen only looked serenely back at him until he shook his head.

Maxen allowed himself to be satisfied. “How are the wedding preparations coming?”

“Everything is mostly settled now.” Tristan’s voice held a strained quality that hinted at the difficulties of trying to get those plans settled. Neither Tristan nor Etan had wanted the wedding to be bigger or more elaborate than it absolutely had to be, but both of their mothers had other ideas. There’d been a delicate bit of balancing and negotiating—and some line drawing from Etan and Tristan finally—because of the fraught relationships there, especially between Tristan and Mother. Maxen didn’t blame him for it. He was surprised Tristan had allowed her anywhere near the wedding plans, or the wedding for that matter. Tristan shot a look at Etan. “There are always surprises, though.”

Etan chuckled. “My aunt unexpectedly arrived from Teilo this afternoon with three of my cousins. Of course, we invited them, but we never thought they would come all that way.”

“That’s a surprise,” Maxen said. “Should you be up at the palace with them? We could’ve dined together another night.”

Etan shook his head. “My aunt decided to eat in her rooms and retire early, which saved us from a long family meal tonight.”

“But it’s good that more family will be at the wedding, right?” Maxen didn’t know the dynamics of the royal family. For most of his life, he’d only seen what they showed to their people—the flawless image of strength, intelligence, and beauty. It was only after Amory had married the prince, and then when Tristan decided to marry Etan, that Maxen began to hear more of the inner workings of the family. He mostly knew the good—the strong bonds between siblings and cousins—but surely there was more to it than that.

Tristan laughed when Etan shrugged slightly. “Well, I haven’t met any of them yet, but Etan says she isn’t the easiest person to get along with.”

“Oh?” Maxen glanced between them, wondering if he should be asking, but Tristan and Etan had brought it up.

“My aunt was raised a princess, the youngest daughter of the previous crown prince, and she’s used to getting her way and expressing her opinion.” Etan shrugged again and slid an arm around Tristan, an action he seemed to think nothing about doing, but Tristan radiated pleasure. A pang of envy startled Maxen so much he almost dropped his drink. Instead, he tightened his fingers around the glass and took a long gulp of the liquor inside.

“I got the impression just from what Amory said that they’re here at her insistence and that she has plans for your cousins,” Tristan said.

“I wouldn’t doubt any of that. I assume we’ll learn what all of her plans are soon, and what her sons actually think of them.” Etan sipped his drink. “I’ve barely seen them in…oh, it has to be ten years—none of us have—but Philip won’t let her run right over them.”

“This is a possibility, I take it?” Maxen felt a bit of sympathy for these unknown cousins of Etan’s. He had some experience with a strong-willed mother who thought she always knew best.

“Amory told me she’s planned out what they’re each to be doing after the wedding,” Tristan said. “Though he also said the twins seemed to have talked her into getting what they want instead. Or that’s what it looked like to him.”

Etan chuckled. “I can believe it. The twins always could slip around people, and they had a mischievous streak, though Alexander was always in the lead there. I wonder if they’ve grown out of it. It doesn’t sound as if they have the former. Should be interesting.”

Etan proceeded to tell a story about the twins as children that involved a party, a fountain, and three swans that was so unbelievable it had to be true. Maxen was still chuckling when they walked into the dining room together a while later. These twins sounded as if they would liven everything up. Maxen was almost sad he’d probably never see it.

About The Merchant’s Love 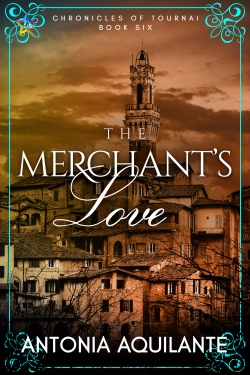 Faelen, cousin to the prince and son of a diplomat, has finally come home to Tournai after years away. The pull to return was almost tangible, and the sense of rightness at being back is absolute. He wants nothing more than to put down roots and build a life among family while pursuing his linguistic studies. Becoming involved in magic meant to protect Tournai isn’t part of his plans…but falling in love is even more unexpected and unfamiliar, but he finds himself doing just that as his friendship with Maxen deepens into something more.

Maxen, second son of a wealthy merchant family, longs to leave Tournai and see everywhere he can. All his life, he’s found places on maps and dreamed, planning out routes to get to them. For now, he’s tied to Tournai’s capital city by family obligations and his position in their shipping business. Someday, though, he’ll be able to travel. His sudden attraction to Faelen shocks him, but their friendship soon becomes a necessary part of his life. Love, however, has no place in his plans, especially not love for a royal cousin with secrets who wants nothing more than to stay in one place.

For Faelen and Maxen to build something real between them, they must resolve their differences, but when magic goes awry and all Faelen’s secrets are revealed, will Maxen remain at his side?

Antonia Aquilante has been making up stories for as long as she can remember, and at the age of twelve, decided she would be a writer when she grew up. After many years and a few career detours, she has returned to that original plan. Her stories have changed over the years, but one thing has remained consistent—they all end in happily ever after.

She has a fondness for travel (and a long list of places she wants to visit and revisit), taking photos, family history, fabulous shoes, baking treats (which she shares with friends and family), and of course, reading. She usually has at least two books started at once and never goes anywhere without her Kindle. Though she is a convert to e-books, she still loves paper books the best, and there are a couple thousand of them residing in her home with her.

Born and raised in New Jersey, Antonia is living there again after years in Washington, DC and North Carolina for school and work. She enjoys being back in the Garden State but admits to being tempted every so often to run away from home and live in Italy.

As part of this blog tour, Antonia is giving away a $10 NineStar gift code!! To enter, just click the link below!