Posted on July 1, 2018 by thebloggergirls

Exclusive Excerpt from Love Me Louder

“So go on—with the kissing.”

Why the hell had he even brought it up in the first place? “I don’t know… A lot of tongue ruins it for me. Don’t get me wrong, tongue is good when you’re in the moment.”

Noah nodded, his stomach swooping a bit at the turn of conversation. “It’s sexy as hell in the heat of the moment, but not right off the bat. I don’t like anyone slobbering on me.”

Will casually lifted Noah’s hand and brought it toward his mouth. “So…like this?” He kissed the middle of his palm, which sent a shockwave through his system. Before Will pulled away, he softly flicked out his tongue, and it went straight to Noah’s cock.

Noah barely refrained from sighing. “Yeah, just like that, you bastard.”

Will laughed and kissed his palm again, apparently enjoying tormenting him.

But Noah had to admit, pretending or not, it felt pretty damned good.

About Love Me Louder 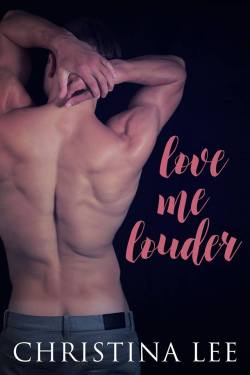 Noah Dixon is damaged goods. After an accident leaves him physically scarred and emotionally vulnerable, dating isn’t in the cards, so he throws himself head-first into his retail job. When he’s obligated to attend his best friend’s engagement party on Fire Island, it dawns on him he’s about to spend yet another weekend feeling totally invisible and alone among a swarm of gorgeous men.

That’s when the idea of an escort comes in.

After Will Crossen was forced to put his theater major on hold in favor of two jobs to tackle his ailing mother’s hospital bills, he tells himself becoming an escort isn’t that big of a deal. It’s just another form of acting, right? He doesn’t expect his newest customer to be the cheery, overconfident sales associate he avoids like the plague at his day job. Talk about awkward.

But what happens on Fire Island stays on Fire Island…especially when a smoldering attraction sparks into flames. Will doesn’t feel so alone anymore, and for the first time, Noah realizes someone is seeing him behind all the scars. But between their jobs, Will’s massive familial responsibilities, and Noah’s vulnerabilities, they don’t stand a chance unless they find a way to let love speak louder than their demons.

Once upon a time, Christina Lee lived in New York City and was a wardrobe stylist. She spent her days getting in cabs, shopping for photo shoots, eating amazing food, and drinking coffee at her favorite hangouts.

Now she lives in the Midwest with her husband and son—her two favorite guys. She’s been a clinical social worker and a special education teacher. But it wasn’t until she wrote a weekly column for the local newspaper that she realized she could turn the fairy tales inside her head into the reality of writing fiction.

She’s addicted to lip balm, coffee, and kissing. Because everything is better with kissing.

She writes MM Contemporary as well as Adult and New Adult Romance. She believes in happily-ever-afters for all, so reading and writing romance for everybody under the rainbow helps quench her soul.