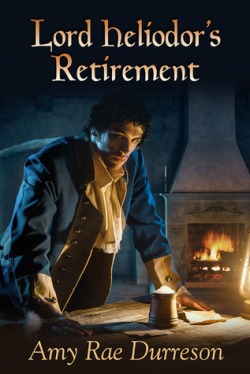 Blurb: Unlikely hero Lord Adem Heliodor saved his queen’s life during the Screaming, a magical attack on his city, but his broken nerves have forced him into an unwanted early retirement to his country estate. Adem thinks his life is over, but retirement holds some surprises. First, there’s his new librarian, who turns out to be not just the first love he thought was dead, but also someone surprisingly knowledgeable about political intrigue. Then there’s the assassin in the orchard and the discovery that the Screaming was just the first attack on the city.

I really enjoyed this one, which I wasn’t expecting because I tried it when it first came out and had a hard time sticking with it, which is why I put it on hold. When I picked it back up, I didn’t expect to like it as much as I did but I was pleasantly surprised when I was sucked in right from the start. I really enjoyed Adem as a character. He had a good mix of emotionally damaged and stubbornly determined that he was fine. Add Corun and I liked how he treated Adem, like he was amusing but also knew that he needed to be treated fragilely. It was endearing to see how easily they became close again and I liked that they had a little bit of history. I also really liked the world it was set in and how intriguing it was with a mix of magic and mystery.

While I really loved this story, I wish there had been more of a background into what happened with Adem, i.e., the Screaming. Actually, I think I would have liked to actually experience it with Adem and maybe get deeper into their characters but also their relationship. And while I adored Corun, I wanted to understand him better. We get a bit of who he is and what he’s done for the last few decades but we didn’t get to delve too deeply into who he was. I would have liked him to have a little more depth especially since he was taking care of Adem and all and I would have liked to get a little deeper into the world this author created.

All in all, I really liked this one. At first, I couldn’t get into it but the second time I picked it up, I absolutely adored it. It could have been a bit longer with a little more depth to the world and characters but, as it was, I had a fun time reading. I hope one day we get to see more of this world and these characters because I’d really liked to know where things go next!