Posted on July 3, 2018 by thebloggergirls

Daniel woke up as he did every day: on time and ready for everything he already had planned from the month before. But as he went through his morning routine, he was not invigorated by the same sense of dull contentment as usual.

Mildred’s comments from the previous day were still resonating, unwelcomed, through his mind. As much as he tried to focus on something else, her words kept coming right back around to the forefront of his mind.

“Live a little” was the endless refrain she kept singing to him. She had never had any children of her own; he supposed she was trying to endanger his life as a proxy. Her idea of living a little was getting involved in a fire fight armed with a knife, or spontaneous parachuting, sans parachute. He had never understood that kind of thrill-seeking behavior. Surely, a long life was preferable to a short life interspersed with the adrenaline fixes. He couldn’t think of anything he’d want so much as to risk death.

Then again, maybe he should live a little. What was the worst that could happen? Upon thinking that question, the gears of his mind started turning out horrifying answers, and he was right back to being happy being bored.

He was distracted from his unremarkable epiphany by a jarring sense of wrongness in the real world. He surfaced from his musings to find he was on the subway platform down the street from his apartment. This itself wasn’t strange, his mornings were so regimented he could go through them automatically without sparing any conscious thought. He sometimes arrived at work without even remembering the trip, but something had stopped him this time, and he wasn’t sure what it was.

Firstly, he made sure that there was no imminent danger. The platform wasn’t filling with a cloud of nerve gas, no one was running away screaming, and he wasn’t ankle deep in rats desperate to escape the tunnels. All of which were good signs. A search of his persons revealed he hadn’t forgotten his briefcase, wallet, or pants. With a shrug, he decided to continue with his commute, and that’s when he realized the problem that had stopped him in the first place: there was no subway car to get on.

He checked his phone to find he was running late. He’d been so deep in Mildred-land he had lost track of time and his train had left several minutes before. Cursing Mildred, he reminded himself it was no matter. He always left early in case exactly this happened. That day, he would have to settle for just arriving to work on time.

A few minutes later, the distant rumble of a train came down the tunnel. With a howl and a blast of air, it appeared next to the platform and screeched to a halt. The doors slid open and, after one or two odd people had petered out, Daniel stepped inside the nearest car.

This train was unremarkable from any other he’d taken, but there was still an uneasiness about it. Over the course of several years, despite not making eye contact with his fellow commuters, he had gotten used to traveling with the same group of people every morning. Not exactly the same but there were always some regulars on his usual car. Gone was the lady who always carried her red umbrella whatever the weather, and in her place sat a black lady with long white-blonde braids. The bench of seats to the right of him, usually full of identical old men in identical suits was completely occupied by a rotund gentleman not wearing a shirt. Surrounded by these strangers that were stranger than his usual strangers, he felt distinctly out of place. He was aware, logically, that there was no greater chance that any of these people were serial killers as opposed to the people he usually went to work with, but that didn’t stop him from wondering about it at length. When he finally felt the train begin to slow in anticipation of his stop, he positioned himself directly in front of the door.

Through the windows of the door, the tunnel outside gave way to a platform. The train lurched to a stop, the door slid open, and Daniel threw himself out. However, his escape was thwarted when he bumped into someone trying to get in.

Then things happened very fast but also in slow motion.

The many and constantly spinning gears in Daniel’s head came to a full stop. The future they were constantly trying to predict disappeared. Daniel was entirely focused on one thought: the man he had just bumped into. 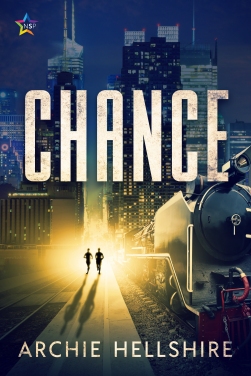 Daniel has spent his life traveling down the same well-worn path, safe inside a prison of his own making, with tomorrow promising no difference from yesterday. Then, one unremarkable morning, he meets someone who throws his life completely off the rails. All he knows about Nathan when he first sees him is that he’s beautiful, but it’s enough to get him to board the wrong train instead of going to the office.

This one careless step off the beaten path has unexpected consequences, as the mysterious passenger is being pursued by a cadre of mercenaries after the parcel he’s tasked with delivering safely to the other side of the city. Daniel has never considered himself brave, or strong, or fast, and he doesn’t come prepared for this fight, but at the right place, at the right time, someone can do the right thing and be a hero for a victim in distress.

Together, staying just out of reach of their pursuers and narrowly escaping tight spaces, they make their way to the delivery point. And as the journey wears on, they learn more about what’s in the parcel they’re carrying, and what it means for the world if they can’t deliver it.

Archie Hellshire is an author with aspirations of being able to write. He was born in the Caribbean where he developed a love of nature, the metric system, and high temperatures. In school, lacking any athletic or social ability, he became a very bookish person, indulging in the works of Douglas Adams, Terry Pratchett, JK Rowling, and Charles Dodgson. Despite being well read, he struggled with dyslexia and would forever remain horrible at spelling. The advent of Spell Checker reignited his dreams of becoming an author.

Archie grew up in a family and culture that was not tolerant of homosexuals, and he spent his entire young life in the closet, retreating into his books and a rich fantasy life. In the theater of his mind, the romances he read could be edited to be male couples. He dreamed of one day writing his own stories and living his own happy ending. Find the author on Twitter.

As part of this blog tour, Archie is giving away a $10.00 NineStar Press Gift Code!!! To enter, just click the link below!