Posted on July 8, 2018 by thebloggergirls

Sexing Up Real Settings and History

My new romance novel, Badlands, is set in Myrtle Beach, South Carolina. Witchbane, the first book in my other new romance series, is set in Richmond, but will move from city to city throughout the series. And in the books I’ve written under my Gail Z. Martin name, I’ve set all kinds of adventures in Charleston, Pittsburgh, the wilds of Pennsylvania, and elsewhere.

Ever wonder how writers use real places and real history? It’s more fun—and maybe a little harder—than you might think!

So here’s the gist of my brand-new Badlands, which is the first book in its series: Medium and clairvoyant Simon Kincaide owns a Myrtle Beach boardwalk shop where he runs ghost tours, holds seances, and offers private psychic readings, making a fresh start after his abilities cost him his lover and his job as a folklore professor. Jaded cop Vic D’Amato saw something supernatural he couldn’t explain during a shootout several years ago in Pittsburgh and relocated to Myrtle Beach to leave the past behind, still skeptical about the paranormal.  But when the search for a serial killer hits a dead end, Vic battles his skepticism to ask Simon for help. As the body count rises, Simon’s involvement makes him a target, and a suspect. But Simon can’t say no, even if it costs him his life and heart

When I set a book in a real-world location, I want the setting to become a character, giving the story such a sense of personality unique to that city that it couldn’t happen in the same way anywhere else. I also know that other people actually live in that location, so I want to make sure that I get my details right, because I don’t want to throw anyone out of the story. That means I do a lot of research online with maps, photographs and history sites (and in my case, sites about ghost hunting and hauntings). If possible, I visit the city and check out the locations in person, but sometimes I end up adding in a location after the visit, in which case online photos and Google Street View are fantastic!

It helps to have lived in a location (as with Pittsburgh and Richmond) or to have visited frequently (as with Myrtle Beach and Charleston—and the other cities yet to come in the Witchbane series). That’s not always possible, but it definitely lends some street cred to getting the vibe right.

Since my books have some supernatural element to them—magic, hauntings, cursed objects, monsters, psychic abilities—I also try to take into account local legends and lore. When I can weave in local ghost stories, urban legends, and spooky history like ship wrecks, famous disappearances or unsolved mysteries, the book feels a lot more authentic to the location. This is one of the most fun parts of writing, because I love these kinds of tales!

The location determines a lot of aspects of the story, from what the weather is like during different seasons to what kinds of natural disasters pose a threat. That helps me decide what ‘tools’ I have in my writing toolbox to bedevil my characters and cause problems for them or put them in danger. Plus, different cities and regions have very different cultures, whether it’s formal or laid-back, suspicious of strangers or welcoming, open to new things or secretive with a lot of baggage. That’s going to shape the characters and the people around them, and determines how they react and what kinds of obstacles they might encounter.

I really love getting to know new places or digging deeper into favorite locations! That’s why all my books are set in cities where I’m happy to have many reasons for a return visit. I hope you’ll do some ‘arm chair tourism’ through my stories, and maybe even decide you want to go visit the places I’ve mentioned yourself!

I’ll be a Hosting Author at RomCon and a Supporting Author at Gay Romantic Lit Retreat in October, so please look me up and say hello!

Badlands is available in ebook on Kindle, Kobo and Nook and in print. We’re working on audiobook. Please also check out Witchbane, the first in my other urban fantasy MM paranormal romance series! 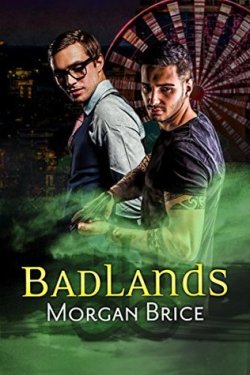 Medium and clairvoyant Simon Kincaide owns a Myrtle Beach boardwalk shop where he runs ghost tours, holds séances, and offers private psychic readings, making a fresh start after his abilities cost him his lover and his job as a folklore professor. Jaded cop Vic D’Amato saw something supernatural he couldn’t explain during a shootout several years ago in Pittsburgh and relocated to Myrtle Beach to leave the past behind, still skeptical about the paranormal. But when the search for a serial killer hits a dead end, Vic battles his skepticism to ask Simon for help. As the body count rises, Simon’s involvement makes him a target, and a suspect. But Simon can’t say no, even if it costs him his life and heart.

An Excerpt from Badlands

“Bikes are a big deal here,” Simon said to fill the pause. “I’m always amazed at how many come through for Bike Week.” Several major motorcycle events each summer turned the Grand Strand into a cavalcade of the hottest cycles on the coast.

Cop Dude shrugged. “I always liked Born to Run. Springsteen fan. What can I say?”

“Sir?” the voice called from the counter, making Simon turn away. “You’re next.” Simon had never been less happy to get to the front of the line.

“I’ll have a Dread Pirate Roberts,” he mumbled, not wanting to look like an idiot to the guy he was trying to impress. He handed over the money, took his change as she rang him up, dropped a one dollar bill in the tip jar, and moved down the counter to wait for his drink.

Le Miz baristas were fast. Simon knew he needed to come up with a way to extend the conversation without looking like a creeper or lose the connection, maybe forever. Just as the barista handed both of them their drinks, a deafening thunderclap sounded, rattling the windows, and the rain came pouring down.

“Want to grab a table?” Simon asked, nervous enough that his throat felt tight. “We’ll drown if we go out there now.”

Simon led the way through the crowded outer room where the tables were all taken to the back room where there was once a display of pirate doubloons and recovered sunken treasures. The room kept its murals of sailing ships and scruffy pirates, along with the odds and ends left behind by the previous owners—a beat-up old chest, a pirate mannequin everyone called “Mo” and a bedraggled stuffed parrot on a perch, dubbed “Percy” by Le Miz regulars.

“You must come here a lot to know there’s a second room.”

“Told you, I take my coffee very seriously,” Simon teased as he sat down. “I’m Simon, by the way.”

“Vic,” the man replied. “So what’s in this mystery drink?”

Vic leaned over his cup, took a deep breath, and his eyes fluttered almost closed. Simon’s heart did a little samba, instantly imagining what Vic would look like blissed out and debauched after sweaty sex. Simon’s erection strained at the fly of his jeans, and he was insanely glad they were seated at a table where Vic couldn’t see how aroused he was.

“Good?” Simon asked, hating that he sounded a little breathless.

“Yeah,” Vic replied, with a little moan that made Simon painfully hard.

“Glad I could turn you on to a good thing,” Simon replied, hoping he hadn’t read the signals wrong since he was blatantly flirting.

“Much obliged,” Vic replied, and maybe it was Simon’s imagination that the man’s voice dropped a little lower, a bit huskier, than before.

“You’ve been here before, you said?” Simon asked, finding that his pick-up skills were as woefully rusty as his ability to make polite chit-chat.

“A few times,” Vic replied. “I haven’t gotten to the boardwalk as much as I’d like.”

“I try not to overdo the special coffees,” Simon said with a self-conscious smile. “I know the sugar adds up. But you’ve got to do something to make yourself feel good now and then, right?” Oh lord, that sounded really bad. I can’t believe I said that.

A wicked twinkle came into Vic’s eyes. “I’m all for feeling good,” he replied, and his foot bumped into Simon’s beneath the table.

It’s just his foot. Doesn’t mean anything. Could have been an accident,Simon told himself, but Vic didn’t move away, and Simon hoped his smile looked encouraging instead of merely nervous.

“So are you in town for business or pleasure?” Simon asked, and cringed internally. What’s wrong with me? I’m never smooth, but I didn’t used to be this awful at picking up a date.“I mean, are you a local or just visiting?”

Vic’s full, sensuous lips quirked in a smile. “Neither,” he replied.

Simon tried and failed at not staring at his lips and imagining them around his cock. Get a grip!Shit, that only changed the mental image to a hand job. So not working! Don’t fuck this up.That didn’t help at all.

“Moved here not too long ago, so I don’t feel quite like a local, but definitely not a tourist,” Vic added.

“Sounds fun,” Vic said, and Simon was so lost in his embarrassment that he almost missed it.

“You would?” he asked, then cleared his throat. “I mean, that’s great,” he failed miserably to cover his awkward reply. Simon was just about to ask for Vic’s number when Vic’s phone went off.

The ringtone sounded odd, and Vic’s manner shifted in the blink of an eye, going from casual and relaxed to tense and alert. “I’ve got to take this,” he said, without even glancing at the number. “I’m sorry. It’s work. Confidential—need to step away.” With that, he got up and headed toward the service corridor that went toward the men’s room, taking his coffee with him.

Morgan Brice is the romance pen name of bestselling author Gail Z. Martin. Morgan writes urban fantasy male/male paranormal romance, with plenty of action, adventure and supernatural thrills to go with the happily ever after. Gail writes epic fantasy and urban fantasy, and together with co-author hubby Larry N. Martin, steampunk and comedic horror, all of which have less romance, more explosions

As part of this blog tour, Morgan is giving away three $10 Amazon Gift cards!! To enter, just click the link below!

Don’t forget to check out Nikyta’s review of Badlands to see what she thought of it!