Serving Him – The Retreat by L.M. Somerton: Exclusive Excerpt!

Exclusive Excerpt from Serving Him – The Retreat

Rowan Stanton held the cream envelope in a trembling hand. The paper was thick and expensive, his name and address handwritten on the front in dark blue ink. The cause of his nerves was the logo on the flap. Though no one else would know it from the logo, Rowan had seen it many times. The letter was from The Underground, an upmarket BDSM club in London. “Oh my God, oh my God, oh my God!” He pelted up the stairs to his attic flat—though flat was a bit of an exaggeration for the space beneath the thatch he rented from his aunt. He shut the door, dropped the latch then took a deep breath. His hopes and dreams depended on the content of the envelope and he could hardly bear to open it in case it contained nothing but disappointment. Gripping the precious letter, he scrambled onto his bed, pausing for a moment to admire the perfectly plumped pillows in their smooth cotton cases. He stretched out, taking care not to rumple the pale blue satin eiderdown, and pulled his threadbare teddy to lie next to him. “Well, Bilbo, this is it.” Bilbo wasn’t much of a conversationalist but he was an excellent listener. “Make or break time.” Rowan slipped his finger beneath the envelope’s flap, ripping it open. It contained a single sheet of folded paper and a train ticket.

“You are cordially invited to attend an interview for the post of houseboy at The Retreat. Please find a rail ticket enclosed. All other travel expenses will be refunded on production of receipts.” Rowan’s heart pounded as he read the words aloud. He hugged Bilbo hard before jumping off the bed and dancing him around the room. The short note gave address details, directions to the club from Westminster Underground station, a date and time. “Four days! I only have four days to wait, Bilbo!” He caught sight of his now rumpled bed cover and had to stop to smooth it. He laid Bilbo on the pillow then took a few deep breaths. It was time to get ready for work or he’d be late. He had no idea how he was going to make it through the day but it had to be done. If he didn’t get the job at The Retreat, he needed to keep his boss onside. Dealing with the uber-rich clientele at Fordingby Manor Hotel might try his patience on occasion, but he loved being able to help people and the money wasn’t bad.

Excitement bubbled like champagne in Rowan’s veins. He took off his striped pajamas, folded them into a neat pile on his pillow then headed for the bathroom. One of the luxuries he most enjoyed in his flat was the power shower his aunt had had installed for him. The force of the spray made his skin tingle. As he washed, he sang at the top of his voice—he wasn’t the most tuneful singer, but he made up for the lack of harmony with enthusiasm. His rendition of Doing the Loco-Motion wasn’t going to win any prizes but it made him happy. He bopped around the cubicle, as much as the constricted space would allow, until his hip made bruising contact with the tiles and vibration created a cascade of shampoo and gel bottles from the shelf.

“Ow!” A half-full container landed on his toe. At least they’re not glass. Rowan finished rinsing before backing out of the shower. He groped for a towel with one hand whilst rubbing water from his eyes with the other. He had a tendency to be accident prone but nothing was going to burst his bubble that morning. Dancing with a bit more caution got him through the drying process without further mishap. A dollop of product helped tame his hair, though it still managed to exert dominance over his efforts with a few random waves, including one rebellious lock that existed only to fall into his eyes. He discarded the towel in order to take a critical look at his reflection in the full-length mirror on the back of the bathroom door. Tilting his head to the side, he gave himself a once-over.

“Not too bad.” He patted his flat stomach, wishing his abs were visible. He twisted, trying to get a view of his arse. The role specification for the post at The Retreat had been very clear. Full or partial nudity would be required. They hadn’t asked for a nude photo with the application, just a head shot, so Rowan hoped they wouldn’t be disappointed by his physique—or lack of it. He didn’t want to miss out on his dream job because he had no money for a gym membership. Working at the hotel kept him trim because he spent most of the day running up and down stairs, fetching and carrying, but it didn’t help build muscle mass. There was nothing he could do about that. Hopefully The Retreat was seeking a short, skinny houseboy with uncontrollable hair.

About Serving Him – The Retreat 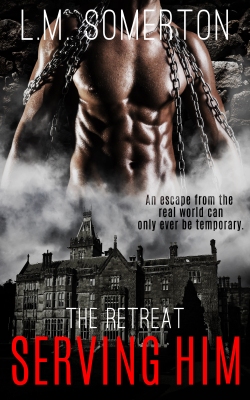 An escape from the real world can only ever be temporary.

Lorcan Wilder is young, rich and successful. He’s also haunted by nightmares and has sacrificed a decade to his business. Selling it gives him the freedom to explore his Dominant side and four weeks at The Retreat are the start of a new life. He doesn’t expect the young submissive employed to serve him will have such a profound effect on him. Exploring and pushing Rowan’s boundaries is exactly what Lorcan needs to separate himself from his past.

Lorcan makes full use of The Retreat’s facilities, from the genuine dungeon to the secret toys concealed in every room. He rediscovers his energy for life and gradually re-engages with the world. However, his efforts to compartmentalize the past ultimately fail and he comes to realize what he’s always known—that true submissives have an inner strength he can only envy.

By the end of his stay, Lorcan can’t let Rowan go, though he thinks he must. What will convince him that he’s allowed a happy ever after, and will he find the courage to accept it?

LM lives in a small village in the English countryside, surrounded by rolling hills, cows and sheep. She started writing to fill time between jobs and is now firmly and unashamedly addicted.

One thought on “Serving Him – The Retreat by L.M. Somerton: Exclusive Excerpt!”