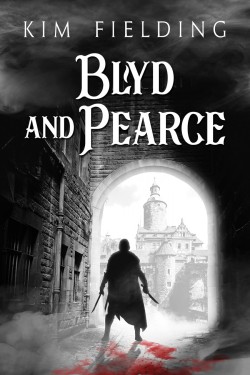 Blurb: Born into poverty and orphaned young, Daveth Blyd had one chance for success when his fighting prowess earned him a place in the Tangye city guard—a place he lost to false accusations of theft. Now he scrapes out a living searching for wayward spouses and missing children. When a nobleman offers him a small fortune to find an entertainer who’s stolen a ring, Daveth takes the case.

While Jory Pearce may or may not be a thief, he certainly can’t be trusted. But, enchanted by Jory’s beauty and haunting voice, Daveth soon finds himself caught in the middle of a conspiracy. As he searches desperately for answers, he realizes that he’s also falling for Jory. The two men face river wraiths, assassins, a necromancer, and a talking head that could be Daveth’s salvation on their quest for the truth. But with everyone’s integrity in question and Death eager to dance, Daveth will need more than sorcery to survive.

For Daveth Blyd, it starts with a case of a missing ring, claimed to has been stolen from a Lord by a singer who also provides more ‘sexual’ entertainment. The Lord gives quite sum of payment to Blyd; his task is to return the ring and at the same time to bring the thief to the Lord. However, not long after Blyd finds the thief – Jory Pearce –  people seem to want to kill them instead. Who the hell is this Jory Pearce, anyway?

“Lead me in this dance, Jory.”

Kim Fielding is back with a speculative fiction, mystery noir, in a medieval fantasy setting. It’s like she writes this book to fulfill my heart’s content. I LOVE reading mystery noir – a private eye who meets a femme fatale, then gets involved in dangerous business while also falling in love with her.

Blyd and Pearce has exactly that – with homme fatale instead of femme *grin* – but because of the fantasy setting, we also encounter wraiths, necromancers, magic spells, in addition to plain ole’ sword fights. IT’S EXCITING, I tell you!! The world that Fielding writes is vivid and colorful complete with the rich, the poor, the outcasts… I found myself easily fallen into this tale. I gobbled up the pages, hungry for the revelation of the sinister plan that Blyd and Pearce were stumbled into.

However, if you are looking for strong romantic flair, I’m not sure this book provides it. Yes, there’s a tender relationship growing between Blyd and Jory, but I can’t really say that it’s prominent, compared to intrigue surrounding the two. I also wasn’t fully satisfied with the ending; it felt rather open, a happy-for-now rather than happily-ever-after *pout*.