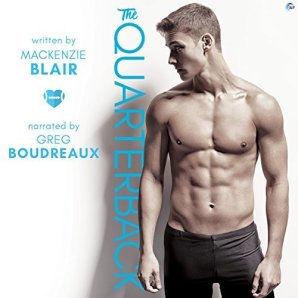 Blurb: Matt Lancaster is the star quarterback at Bodine College, a small Southern Division II school with an ultra-conservative dean of athletics. Matt is also very much in the closet, and he thinks he’s kept his secret well hidden, until his best friends take him to a happy endings massage parlor and request a male masseuse for him.

In walks Trevor Kim, a gorgeous, pierced, tattooed fellow Bodine student who does massages – without happy endings – to pay for school after his family kicked him out for being gay. Trevor takes one look at Matt and breaks all his own rules about mixing business with pleasure.

Matt needs to keep his scholarship, win the National Championship, and survive his asshole father. Instead, he falls in love. Trevor needs to accept that the football god is meant to end up with him rather than a perky cheerleader. It’s time for a “happily ever after” for both of them.

I previously reviewed the ebook in October 2017, so check out my review here.

Audio Review: Greg Boudreaux is a favorite narrator of mine so when I saw that he was performing this book, one that I’d read, and really liked, back in the fall, I knew I wanted to listen to it. I was not disappointed.

Greg performs both Matt and Trevor perfectly. I could easily distinguish who was speaking and their emotions at times were near palpable. I was going to say, especially Matt’s emotions, but Trevor had a couple moments, as well. Probably my favorite parts were at the beginning and the end. At the beginning I could clearly see in mind’s eye Matt jumping off the massage table when Trevor dared to go where no man has gone before. And again at the end, when Matt kisses and claims Trevor publically. Both parts were performed spectacularly and I was left either laughing or swooning.

Whether you’ve read this book, or not, I highly recommend you give the audio a try. It is a great story masterfully performed.