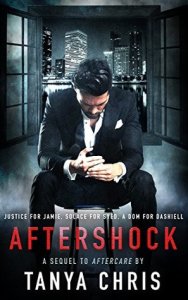 Blurb: Being acquitted of Jamie’s murder won’t bring him back. Syed might be free, but he’s lost his lover and his sub, along with his sense of control, his libido, his friends, and the stomach to inflict the kind of pain Jamie thrived on. Even his high-rise apartment doesn’t suit him anymore.

Dashiell is drawn to the handsome man he represented in court, but he’s promised himself never to get involved with another confident playboy. His next boyfriend—if he can find such a thing—will see him as something more than a backup plan for a better offer. And how could he ever give a man like Syed what he wants anyway?

Dashiell fears the day Syed will ask him to bear more pain than he can handle as Syed struggles to reconcile how he’s coming to feel about Dashiell with how he still feels about Jamie. Can their fledgling relationship survive the discovery that Syed’s new sub might be representing the man who murdered his last sub?

Jamie deserves justice, Dashiell deserves love, and Syed wants to be the one to give both these men exactly what they need.

Review: This story is somewhat a continuation of the previous book, Aftercare. Syed is the bother of Aayan, and Garrett, Aayan’s now partner, was the lawyer who helped Syed with his murder case. Dashiell was Garrett’s associate who helped with the case. So, while you can probably read this on its own, you would have a much better understanding about what’s transpired to get to this point if you read the first part.

So, now, Syed has been acquitted of murdering his lover, Jamie, though his kinks and sex life has been through the wringer for it. On top of that, he is still grieving for Jamie and shouldering a lot of guilt over not doing more to show him how much he meant to him when he was still alive.

Things get a bit complicated when Dashiell gets a new case that has a big impact on his relationship with Syed. But, it was great to see Syed support Dashiell, despite the circumstances, and it was wonderful to finally get some closure for him where Jamie was concerned.

All in all, I’m glad I didn’t miss this follow up. I loved the style and story telling by Ms. Chris and won’t hesitate to grab another of her books. Highly recommend.