Book Review: After the Fire by Felice Stevens 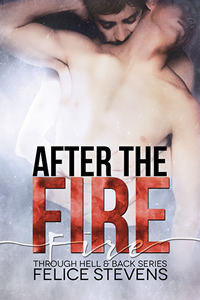 Blurb: A single bullet destroyed the dreams of Dr. Jordan Peterson. With his lover dead, Jordan descends into an endless spiral of self-destruction that nearly costs him his friends, his career and his life. When Jordan finds himself working closely with the aloof Lucas Conover, the investment banker’s mysterious past and unexpected kindness shocks him back into a life and emotions he’d thought lost forever.

The betrayal by the foster brother he’d worshiped, taught Lucas Conover never to trust or believe in anyone. Living a solitary life doesn’t free him of the nightmare of his youth; it reinforces his belief that he would never fall in love. When the death of one of his clients forces him to work closely with Dr. Jordan Peterson, he meets a person whose suffering exceeds his own. Though Jordan rejects his effort to help, something within Luke pushes him discover more about the first man to ever get under his skin.

As Luke lets down his guard and Jordan lets go of his pain, desire takes control. Each man must come to terms with past struggles if they are to create a future together. And learning to trust in themselves and love again after tragedy and a lifetime of pain, may be the only thing that saves them in the end.

This is a re-release of the original version published in 2015. It has been re-edited with over 4000 words of additional content added.

Talk about the epitome of walking through hell and almost not making it back. Sheesh, as much as a pain in the butt Jordan was in book one, A Walk Through Fire, no one deserves the heartache that was heaped on top of him at the end of that book, and continued for a good portion of this one. You would have to be heartless to not feel the hurt and pain that Jordan suffered after losing his fiance, and his best friend too since he blamed Drew for Keith’s death. And, I kind of agreed with him. Drew was stupid and his actions were the catalyst that caused Keith to lose his life. I would have been in the same place with Jordan, popping the Xanax, just to get through each day.

Now, I am not condoning drug use, and there is bit of it here, but I can totally relate to the mental anguish of losing someone you love. Jordan is an arrogant and ego driven man, and letting anyone know how much he was suffering was not in the cards….until he runs into Lucas. Lucas was almost as hard to love, initially, as Jordan was in book one. Seriously, those two really deserved one another.  But, Lucas suffered as well. He felt betrayed by Ash, his foster brother and it took him forever to give the poor guy a chance. If it weren’t for granny Esther, I doubt any of these boys would have sat still long enough to talk out their problems.

Lucas pushes everyone away, and for good reason. He has trouble trusting and never expected to fall in love. But Lucas is miserable and needs his brother as much as he needs Jordan. It just takes him a while to get there. His jealousy of Dr Tash was a much needed eye opener to see that he really did not want to lose Jordan, even though he was extremely judgemental and ego driven. I know I am not making these guys sound lovable, and at first they aren’t, but you understand how much each of them have endured and you can’t help but give them a pass.

Not an easy book or series, but so far, the happy endings are two for two. Now, I am going in for book three.