Posted on October 13, 2018 by thebloggergirls

Exclusive Excerpt from Savor Me

As the cold water hit him, Xander yelped, throwing his hands up. “I take it back, I take it back,” Xander said, moving out of the way to try to dodge the spray after that first, frozen moment. Damon might have been worried, but he was laughing so hard it was hard for him to avoid the stream of water from the hose.

“I thought you were hot,” Damon teased.

Xander slipped on a patch of muddy ground, and nearly lost his balance, but his recovery was excellent. He moved with the grace of an athlete—or a dancer—and Damon never wanted to stop watching.

He only realized too late that Xander wasn’t just trying to move out of the way of the water. He was actively moving toward where Damon had plugged in one of his sprinklers. He leaned down for a second, his wet running shorts plastered to his ass like a second skin, and Damon lost track of what it was he was supposed to be avoiding. That incredible butt, toned and shapely and essentially begging for Damon to do terrible, wonderful things to it?

A cold spray of water to the face from the hose Xander had unhooked from the sprinkler had him gasping, but his thoughts hadn’t gotten any cleaner.

“You’re playing dirty,” Damon gasped through another burst of water to the face. He wasn’t going to tell Xander this, but it felt damn good after sweating all day.

Xander’s eyes narrowed, a bright smile blooming across his handsome face. “You love it,” he shot back.

He really did, and he never wanted Xander to stop. He loved every sneaky part of him, every achingly blunt part of his personality. Damon wanted it all, if only Xander would let him.

Damon turned the hose on himself, water cascading over his head. “I love this,” he teased. “But you could lean over again. Could use another firsthand bit of evidence to prove how much I love it.”

Following suit with his own, Xander turned his hose on himself, drenching every inch in water. His tank clung to every lean, muscular curve of his body, and Damon wanted to drop to his knees in the mud and beg.

“Yeah,” Damon ground out, voice gruff and low, his erection growing despite the cold water he was pouring over himself, “yeah, I love that.”

Xander’s eyes sparkled with impudence as he sidled closer, letting Damon get a good look. He placed a cool palm on Damon’s bare chest, right where his heart beat hard and fast. “I love it too,” he said. 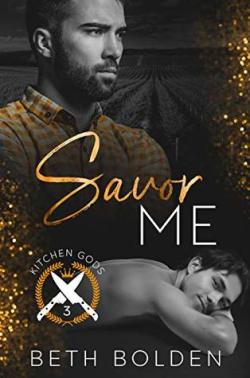 When Chef Xander Bridges leaves the warmth and safety of his car on a cold, stormy night and approaches a stranger, the last thing he expects to find is a future. He’s wanted to leave his job for awhile, but with no good opportunities on the horizon, he’s been stuck in a long, painful rut. But when he befriends the stranger viciously tearing up his own vineyard, Xander discovers something inexplicable. Maybe he’s not the bitter, sarcastic man that everyone, including himself, has endured for years.

Maybe, with someone like Damon in his life, he could be something more. Something better.

Damon Hess doesn’t just want more, he demands it. With his alcoholic past, there are no gray areas for him. Only black and white. In love or not. Sober or drunk. But the chance meeting with Xander opens Damon’s eyes, and gives him a vision full of something he hasn’t experienced in years: hope.

Hope that he can expect companionship and affection, hope that he doesn’t have to grapple with his family’s questionable Napa legacy any longer, and most importantly, hope that there’s a future worth believing in. But the longer he and Xander spend cultivating that future, the more Damon realizes that the key is so much simpler than he ever imagined–it’s Xander.

Savor Me is an 80,000 word contemporary m/m romance starring an irascible man with a soft, gooey marshmallow center and another who knows he likes men, but has never been with one before. It is third in the Kitchen Gods series, but can be read as a standalone.

Beth Bolden lives in Portland, Oregon with her supportive husband. She wholly believes in Keeping Portland Weird, but wishes she didn’t have to make the yearly pilgrimage up to Seattle to watch her Boston Red Sox play baseball. She’s a fan of fandoms, and spends too much of her free time on tumblr.

Beth has been writing practically since she learned the alphabet. Unfortunately, her first foray into novel writing, titled Big Bear with Sparkly Earrings, wasn’t a bestseller, but hope springs eternal. She’s published eight novels and two novellas, with Catch Me, the next novel in the Kitchen Gods series, releasing in May 2018.

As part of this blog tour, Beth is giving away a $20 Amazon Gift Card!! To enter, just click the link below!

Don’t forget to check out Nikyta’s review of Savor Me to see what she thought of it!