Posted on October 17, 2018 by thebloggergirls

What is your greatest fear?

I have a number of fears. Spiders, snakes, falling, tornadoes, driving into water, but the one that probably affects me the most in my day to day life is my fear of disappointing people. Mostly my family and people at work, like my boss. But sometimes I feel bad if I accidently cut someone off in traffic or, like the other day, panicking and pulling away from an intersection when the police were trying to get through. I was thinking they needed me out of the way when they really wanted me to just sit there and they would go around me. I felt so bad about it I wanted to follow them and explain…

What character trait do you like most in yourself?

I believe I am kind and positive. When people ask me how I am I always tell them I am amazing. Most people in my life are used to it but it’s fun sometimes to see how saying that (very much habit now) affects other people. Like people behind the counter at the grocery store. Sometimes people grumble but most of the time they are surprised. I think most people tend to be a little more negative and sadly that has become the normal

What do you feel passionately about?

Positivity. I do not have a great memory. In fact, I have a poor one. Always have. I have learned to write things down, make lists, use calendars in my phone and on my computer. So I can’t get out there and debate stuff. But I can defend positivity like a pro. I am also passionate about faith, love in all its wonderful forms, and that everyone can choose happiness.

I am definitely a follower. I consider myself submissive.

What are your long-term goals?

Of course to be a better writer. I would love to do it full time.

Do you plan things out?

I am a planner for the most part. Sometimes my stories take off in directions I don’t expect but ultimately, I am still in control. As far as life? I have lists and lists of my lists. I am a planner.

What is your most treasured possession?

Other than family and friends, it’s probably my computer with all the unwritten stories still in it.

About To Save His Prince 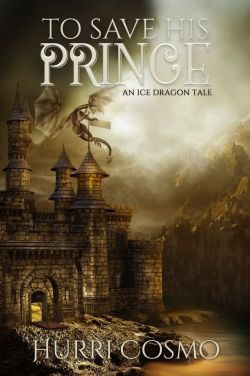 Emory is a humble kitchen servant intent on working hard so he can continue to earn his daily crust of bread. It is a thankless, back-breaking job, but it is exactly where Emory wants to be. In the magnificent West Quay castle. Because that is where the incredibly handsome, extremely talented Crown Prince Riffyn lives. The beautiful, kind, and attentive man stole Emory’s heart years before when he rescued him and his mother from a band of thieves. Now Emory’s only wish is to be close, so he can simply admire and serve the man.

But a great evil walks the halls of the castle, and Emory stumbles on a heinous plot to not only kill the prince but a possible plan to overthrow the Kingdom. A wicked scheme that includes the use of magic. Of course, being a lowly servant, no one believes Emory when he tries to raise the alarm, including the prince, who has been commanded to choose a bride now, or one will be chosen for him. Even as Emory’s heart breaks for his prince, he has to find a way to save him. But how, when no one, not even the king, the prince’s own father, can be trusted?

An Excerpt from To Save His Prince

Emory was surprised when he opened his eyes next. The room was bathed in bright sunlight. Sucking in a breath for sleeping so late into the day, he shot out of the bed and headed for the door he shared with the prince’s chambers. He grabbed the handle and pushed just enough to see what he could be facing upon entering the prince’s room.

Riffyn was up and sitting at his desk, a tray of what must be breakfast sat beside him. Emory could smell the coffee from where he stood, and he longed for just a taste. But then other fragrances assaulted him. There was bacon and fresh bread, possibly something cinnamon, all sitting on that tray.

“Thank you, Duncan,” the prince said.

Emory had totally missed the servant who had brought the tray in. Duncan moved around the prince, his attention on the man’s torso, which was bare and breathtaking. Evidently, Riffyn had only just woke as well. He sat, shuffling papers, as if searching for one in particular. Emory couldn’t help but stare at the prince. Oh, how he wanted to touch him, suck on those dark nipples.

“Let me pour your coffee, Your Highness,” Duncan breathed from behind the prince, far too close to the prince’s ear. But Riffyn gave no reaction at all. He seemed to be intent on the paper he now held in his hand.

Duncan poured the coffee and handed the mug to Riffyn. “Your Highness?”

“Ahh. Yes. Thank you.” Riffyn took the mug and sipped the steaming liquid as he gazed up at Duncan, who had come around the front again. “You have done well, Duncan.” The prince seemed to coo and then smiled at Duncan, who beamed back. Emory’s heart squeezed tight with jealousy, wishing it was him who the prince gave that smile. So much so, he wanted to cry. But then Emory must have made some sort of noise because the prince glanced over at him standing hiding in the doorway.

“Emory! You’re finally awake. Come out. Breakfast is served. There is plenty for the both of us.”

Emory stepped out from the doorway. He could do nothing else when the prince commanded him. But he did not relish the fact that Duncan startled at the sound of his name and swung around, eyes as big as the plates he had brought in.

“Emory? What are you doing in the prince’s chambers?”

His tone was accusatory, one of authority, gruff and hateful. In all other instances, Emory would have shrunk at its harshness, knowing he had to have committed a heinous crime. But that was not the case here. He had done nothing wrong. Still, his heart jumped painfully, and he did stop immediately, his stomach protesting, probably believing it was going to be starved of food again for possibly days as was the usual punishment. But then Emory’s gaze met Riffyn’s and he instantly calmed.

“Duncan,” the prince challenged quietly from behind him. “Do you believe I need to explain myself to you when I have a guest in my chambers? Is that your place?”

Duncan scowled at Emory before he turned back to Riffyn. “No, my prince. I apologize for my rudeness. Forgive me, Your Highness.” To Duncan’s credit, he did appear to be apologetic. He waited, hands behind his back, and Emory could tell his gaze was on the floor in front of him even though he was turned away from him. Riffyn glanced up to Emory, smiled, and winked, before he answered Duncan.

“You are forgiven. But it will never happen again, correct?”

“No, Your Highness. Never.”

“Good. You are excused.” Once again, Riffyn glanced toward Emory. “Come, Emory. Sit. I will pour you some coffee.” Riffyn picked up the decanter and poured the contents into an empty bowl. “I apologize I did not have two mugs brought up, but I think you should be able to manage.”

Emory hurried to the desk and took the offered bowl, wanting to remind the prince he was not supposed to be serving him, but due to the fact Duncan had yet to actually leave the room, he chose not to say anything. He hazarded a glance at Duncan and the daggers the man was shooting with his eyes made Emory shiver.

“Are you still chilled from last night? You should have brought a blanket with you.” Riffyn rose and walked to his own messy bed, grabbed the top cover, and pulled it off. It was then that Emory realized he had forgotten about his own state of dress, which was only a borrowed nightshirt, clearly too large for him. It was thankfully rather long, but his legs were still very bare, and he couldn’t even fathom how it must appear to Duncan. Riffyn walked to Emory, swept the blanket around his shoulders, and guided him, with his arm around him, to sit in the chair in front of his desk. “As you can see, we have your amazing fresh sweet rolls. You might actually be tired of them, being you work in the kitchen, but they are my favorite.”

“I’ve… never had them, Your Highness.”

“What? Are you serious? Oh yes. The incomparable Master Merrill. I will see to him today. In the meantime, I dare to say, Emory, you are in for a treat.”

Emory had his back to Duncan now, so he couldn’t see him, but he could feel the loathing pouring off him. Then, gratefully, the doors clicked shut, which told him Duncan had finally left and most likely gone running to tell the kitchen master about Emory’s horrible impropriety of being half naked in the crown prince’s chambers. It would be all over the castle before the next sunrise.

Hurri Cosmo lives in Minnesota where she holds tight to the idea that there, where it’s cold a good part of the year, she won’t age as fast. Yep, she avoids the truth as much as she avoids mirrors. But one of the reasons she loves writing is reality doesn’t always offer up a “happily ever after” and being able to take control of that is a powerful lure. Being a happy ending junkie, writing just makes them easier to find. Oh, she doesn’t mind “real life” and she does try to at least keep it in mind when she writes her stories, but she truly loves creating a wonderful couple, knowing they will fall in love and have their HEA. Every – single – time. And, of course, that is exactly the reason she loves reading this genre, too. Give her a glass of red wine, some dark chocolate, and her computer, whether she is reading or writing, and she will entertain herself for hours. The fact she actually gets paid to do it is Snickers bars on the frosting on the cake.

As part of this blog tour, one lucky winner will receive a $25.00 Amazon Gift Card!!! To enter, just click the link below!