Posted on November 3, 2018 by thebloggergirls 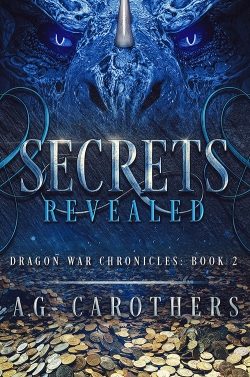 Last time on Dragon War Chronicles, we left our heroes fighting for their lives in the midst of battle…

Kollin races against time to get samples of the weapon used in Canada to their lab in Oslo. Kenshin races to get Danica back home in time to save her, Aiden and Xander. Danica’s allies start to converge in Toulouse in aide and help to prepare for what may come.

Will Kollin be able help save Danica, Aiden, and Xander before all is lost? Will Matt be able to track down who’s responsible for a new weapon that threatens them all? What will happen when Danica’s biggest secret is revealed?

Secrets are revealed that will change the future for all dragon and SLIP kind alike.

An Excerpt from Secrets Revealed

“What are you doing, Mathieu?” Xander’s tone serious as he lifted his chin up with a finger.

“What we should have done years ago.” Matt’s voice was soft as he continued to lave Xander’s chest.

“But…” Xander tried to push himself back to put space between them.

“No, buts I know. I almost lost both of you.” Matt interrupted, pulling him back. “You don’t know what it was like when they brought you home.” Matt hissed through clenched teeth. Xander held still, and Matt looked up at him, his gaze piercing Xander’s. Matt bared his soul and showed him all the pain he was holding back with just one look into his usually vibrant eyes. Xander leaned down, his heart almost breaking at the thought of hurting Matt this way and he ran his tongue over his lips softly and kissed him tenderly.

“If something happens to me…” Fear of Matt dying because of him constricted his throat.

Matt sighed. “I know, and I accept that. I had a lot of time to think about life without you, and it’s not pretty. Even though I have many more years ahead of me, you’ll have to watch me grow old eventually. I don’t want that either. I want this right here”—Matt waved a finger between him and Xander—” me in your arms, your lips on mine, your smile to brighten my day and the crazy dragon in the other room to drive both of us nuts for at least the next millennia.” He pointed back behind Xander.

Matt cupped Xander’s face in his hands bringing his head down close to his. “You are my heart, and I love you with every bit of my being.” Stray tears mixed in with the water running down the sides of Matt’s face. “Will you be my mate and claim me as yours for eternity?”

Xander saw the love and determination reflecting at him in Matt’s eyes. He had never really thought about that before. They’d always been so caught up in the here and now that he hadn’t given much thought to the many years before them. Seeing the love and pain in Matt’s eyes broke his heart and he knew then that the thought of watching him die before him would break him.

A.G. Carothers is actually a dragon very cleverly disguised as a human. They are a non-binary author of LGBTQIA Urban/Paranormal Fantasy, who enjoys writing original and entertaining stories. They are very excited to share the worlds they’ve created with you.

A.G. currently lives in Tennessee with their platonic life partner, who is not a dragon. They yearn to live back in Europe and will someday. In their spare time they are addicted to losing themselves in the lovely worlds created by other authors.

A.G. is committed to writing the stories they see in their head without restrictions. Love is blind and doesn’t see gender, race, or sexuality.