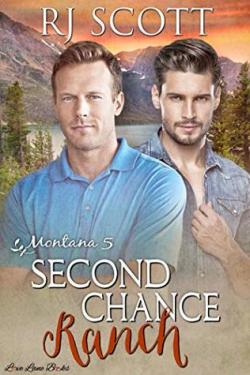 Blurb: Rob runs to Crooked Tree determined to find a safe place for his nephews. A family for them is the final thing on his list, and then he can vanish completely. Falling for a local paramedic along the way is a disaster in Rob’s otherwise perfect plans.

Paramedic Aaron, the middle of five brothers, would like someone to love. A great believer in fate he is convinced though, that one day he’ll find someone. He just never thought it would be a man in so much pain, or that children would be part of the package.

Rob is ready to leave. Aaron wants him to stay. Their love has an expiry date, and it’s tearing them apart. Can they find a way to save what they have?

The Final book in the Montana Series

I kinda loved Rob. Even though he is a pretty scary guy, and a part of me hated how he “turned” on Justin in book three, I understood. I understood him, I understood his and Justin’s past, and I understood his need to reach out to the only person he could trust, Justin. Justin didn’t want any part of his past coming to Montana or coming to threatened his life with Sam, but he also understood that Rob was desperate…and he came with two small children who needed help.  Something that Second Chance Ranch can provide.

Aaron and Rob together were an equal mix of sexy and comedy. Even though there was nothing funny about Rob’s situation, Aaron was all about getting himself laid and getting laid with Rob. No matter what Rob said verbally, and he said a lot, his eyes spoke the truth. Aaron is like a determined puppy and Rob is his new toy. Rob never stood a chance. But, Aaron doesn’t know about the secrets in Rob’s life. Secrets that can end any hope of forever before they ever get started.

I enjoyed this installment of the Montana series, even though men with children are not a favorite trope of mine. But in this case, the kids were the only thing that brought Rob to the ranch, and by extension, to Aaron. They play an intrical part, but they do not take away from the blooming romance between these two alpha males. My heart really did go out for Rob, and I sometimes really wanted to smack Justin for being such a jackass to him, but…. there is always a but. In the end, though is seemed unlikely, Aaron and Rob get their hard won happy ending, and Justin earned a few brownie points.