Release Blitz: All I Want Is You by DJ Jamison + Giveaway!

Posted on November 29, 2018 by thebloggergirls

All I Want Is You by DJ Jamison 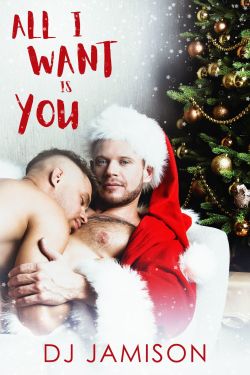 One kiss under the mistletoe destroyed a friendship. Will another Christmas kiss remake it into something better?

Eli hasn’t been home since he left at eighteen with a heart aching from his best friend’s rejection and his father’s intolerance. But when his father reaches out, Eli figures it’s time to make peace with his family. He doesn’t expect to come face-to-face with Turner too — or to learn that the straight friend he’d foolishly loved is actually bisexual — but once the shock wears off, he knows exactly what he wants for Christmas.

Turner’s life isn’t everything he’d once planned, but he’s happy to be the shoulder his loved ones lean on. They keep him busy, which is just as well since none of his dates have really clicked. He hasn’t been able to connect with anyone the way he did with his former best friend. When Eli shows up for the holidays after years away, Turner doesn’t know what hit him. But he knows one thing: This time, he wants to give Eli a reason to stay.

All I Want Is You is a friends to lovers, second-chance romance with an HEA.

An Excerpt from All I Want Is You

Turner kissed him, and Eli’s heart exploded into a frantic pace. Turner’s lips were on his, finally. And all his anger, all his disappointment washed away on a wave of endorphins.

This felt right. It was as if he’d been holding his breath for eight years, and he could finally exhale.

But it was over too soon. Eli hadn’t gotten a taste of Turner’s tongue, the kiss quick and chaste. He hadn’t gotten to run his fingers through his hair. Hadn’t put his hands on him at all.

Nothing but their lips had touched, and it was the single, best kiss of his life.

“I’d like us to be friends again, real friends,” Turner said. “Even after you leave again for California.”

Oh, right. Eli would be leaving. Turner would be staying. Nothing had changed.

“I know you’re not staying long,” Turner added. “So, it’s just a kiss. Between friends.”

And yet he sensed something more between the lines of Turner’s spoken words. Honesty, yes, but also yearning. Could it be possible that Turner wanted him as much as he’d always wanted Turner?

There was only one way to find out.

Eli wrapped a hand around the back of Turner’s neck, tugged him close, and kissed him hard. If he was only getting one kiss, he was going to make it count. He was going to kiss the daylights out of Turner and decide for himself how much Turner Williams wanted Elijah Harp.

DJ Jamison is the author of more than a dozen m/m romances, including the Ashe Sentinel series and the Hearts and Health series. She writes a variety of queer characters, from gay to bisexual to asexual, with a focus on telling love stories that are more about common ground than lust at first sight. DJ grew up in the Midwest in a working-class family, and those influences can be found in her writing through characters coping with real-life problems: money troubles, workplace drama, family conflicts and, of course, falling in love. DJ spent more than a decade in the newspaper industry before chasing her first dream to write fiction. She spent a lifetime reading before that, and continues to avidly devour her fellow authors’ books each night. She lives in Kansas with her husband, two sons, two fish and, regrettably, one snake.

As part of this blog tour, DJ is giving away a $25 Amazon Gift Card!! To enter, just click the link below!

Categories: Book Promo, Excerpts, Giveaways, Published in 2018 | Tags: All I Want Is You, DJ Jamison, The Blogger Girls | Leave a comment