Posted on December 10, 2018 by thebloggergirls 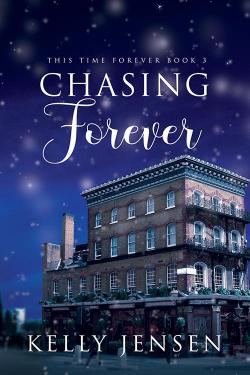 Blurb: Old wounds, new directions, and a forever worth chasing.

Malcolm Montgomery was a history teacher and track coach until an accident left him with two broken legs. He’ll recover, but life has knocked his feet out twice now. He’s not sure if he’s ready to try again, especially when it comes to love—and slick guys like Brian Kenway. Still, he needs help mentoring the school’s LGBTQ society, so he asks Brian to take some responsibility.

Brian has been hiding behind his reputation as a liar and a cheat for so long that he actually believes he’s that guy—until his nephew, Josh, turns up on his couch, tossed out for being gay. Brian has never considered being a father, but he knows all about being rejected by loved ones. Now Brian wants to be more: a partner for Mal and a role model for Josh.

But when Mal’s recovery is set back and the sad truth of Brian’s past is revealed, the forever they’ve been chasing seems even further from their grasps. It’ll take a rescue effort to revive their sense of worth and make Brian, Mal, and Josh into a family of their own.

It’s always interesting when a villain from previous book ends up being the hero of the next book. Brian Kenway is the serial cheater ex-boyfriend who walked out of Simon Lynley (the hero in Building Forever) after twelve years of relationship. Then Brian shows up again in book two, seemingly trying to make amends.

This time we find out more about who Brian really is and what secrets he keeps apart from everyone else in his life, including his best friend and Simon when they were together. This happens as Brian finds himself as a temporary place for his fourteen years old nephew who is tossed out for being gay as well as starting a new relationship with Malcolm Montgomery, a fifty years old professor, who is unlike the men Brian usually keeps his bed warm with.

For the most part, I think this book is able to redeem Brian. We learn about Brian’s past, the moment that scars him, and probably the big reason why he keeps sabotaging his relationship, especially with Simon. It may be a little easy answer – of course it has something to do with his past! – but it also provides some powerful moments in this book. I like the way Jensen brings Josh, the nephew, into the mix, as part of Brian’s catharsis proses.

I may not have too many opinion about Malcom – I admit, he is a little bland for me as a character. He has good family and friends. Malcolm might be recuperating from a horrible accident in this book, but he’s also a little awkward and a little too insecure. But Malcolm is also willing to take chances – and everything that builds Malcom as a character is what makes Brian finally let Malcolm to see all of himself.

They are not perfect but in their flaws, they are good for each other.